Riley Hart sucked me into the world of the Atlanta Lightning once again with The End
Zone and I loved it! 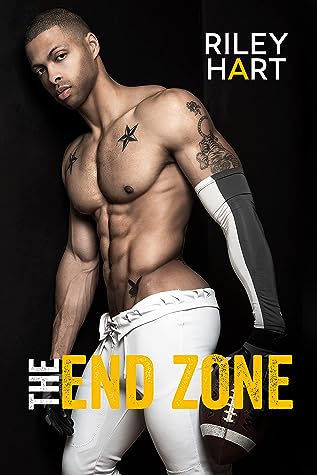 Seeing my best friend West, happy with his fiancé opened my eyes to things I've been missing in my own marriage. My divorce, which was amicable, followed. Strangely, at West's wedding, I find myself confiding in Darren, the straight, confirmed bachelor and star quarterback of the Atlanta Lightning. Darren is a full-steam-ahead kind of guy, and one talk leads to hanging out, swapping phone numbers, and pranking West and Anson while they're on their honeymoon. When I head back to California, I expect our chats to end, but I couldn't be more wrong.

I still can't say how it happened, how a random decision to strike up a conversation with Jeremy turned into...whatever this is. All I know is, months later, my days aren't complete until we tell each other good night. Whether it's on our calls or when he flies to Atlanta, we talk about everything, lying awake together half the night. Jeremy's got me feeling...different. If it was just my newly discovered bisexuality, that'd be one thing. I'm not one to stress about being into a man for the first time. It's the other stuff, the way he makes my pulse race and my heart swell, that's throwing me for a loop.

I didn't think I was made for relationships, but I want it all with him. Except, it feels like as soon as we make it past one obstacle, there's an even bigger one waiting for us. We just have to keep our heads in the game and our eyes on the prize, to make it to the end zone, before one last tackle takes us down for good.

OMG I loved Darren and Jeremy in the first Atlanta Lightning Book, The Endgame and from the get go I secretly hoped they'd get together and boom, Riley Hart read my mind and gave us another perfect HEA for them in The End Zone!  The pace, the writing and the characters are so natural and effortless that you really feel like you are a voyeur into their lives as Darren discovers his expanding sexuality and Jeremy fights against falling for a 'straight' man.  Just the right amount of angst and an unfortunately correct amount of homophobic drama keep you glued to the page.  I also love that we get to see Mia again of course!  You really need to read West and Anson's story first to truly get the nuances of this book, but since they're both 5+ star reads you won't go wrong!