Suddenly Beck by Vawn Cassidy (Belong to Me #1) - 5 Stars

While Vawn Cassidy is a new to MM author pen name, she is a well respected writer of many other genres as both Wendy Saunders and WJ Saunders and it shows in her debut MM read, Suddenly Beck! 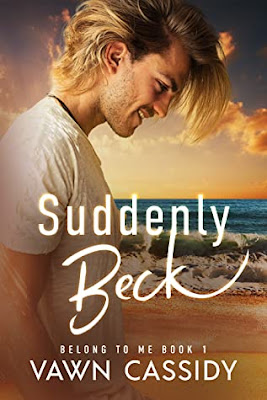 Nathan Elliott has run away from home at the age of twenty-six. His teenage rebellion may have come ten years late, but better late than never. Leaving behind a world of wealth and privilege, and a strict patriarchal family that would never except a gay son, he’s ready to embrace life and make up for lost time, but nothing’s ever that simple. A coin toss, a delayed train, and a wrong bus later, and Nat finds himself in a small bay in Cornwall being hauled out of the ocean by a gorgeous stranger and wondering how the hell his life got so off track.

Beck Ainsley lives life by a very simple ethos, don’t get attached, don’t get involved and don’t fall in love. He’s been there, done that and got the t-shirt that reads I’m a gullible idiot. Now, he keeps his life simple; all he needs is his dog, his art, his rambling sea cottage overlooking the bay and a few choice waves to surf. He’s not looking for love or commitment, but when he ends up plucking a posh boy from London with incredible blue eyes from the ocean, Cupid doesn’t just shoot him with an arrow, he decides to club him senseless with the bow too.

One simple agreement. A summer fling, a chance to act on the insane attraction between them with no strings attached, and at the end of the summer they walk away.

There’s just one problem, fate is a fickle and capricious creature, and she has no intention of letting them walk away unscathed. They’re about to discover that sometimes the heart wants, what the heart wants…

The ease with which I was transported by train from London to the bay along with Nat was astounding!  By the time he is plucked out of the ocean by Beck, I was enchanted by both men and hungering to find out how their lives would become entangled.  I was not disappointed!  This was a sweet, steamy and stimulating read that packed just enough emotional punch without being too angsty.  I also loved all of the side characters, particularly Molly and Bernard and of course the Ainsley Clan!  If you need a vacation and want to visit the Cornish coast without actually having to go, hook up with Suddenly Beck and enjoy surfing the book!  I can't wait to see what else happens in the next Belong to Me book!

Nathan is running away from his life. He hates his job, his family are cold and disinterested and has decided it’s time for a change. A fallen tree and the wrong bus leads him to the Bay and a near death experience leads him to Beck. Beck was born and raised in the Bay and spends his time sculpting and creating in his cottage by the beach. A late night walk in a storm introduces him to Nathan in a rather dramatic fashion.

I loved how caring Nathan was and how you gradually get to learn more about him and his upbringing as the story progresses. His dedication to changing his life and following his passions was just amazing. Beck is such a character and at times I was laughing out loud reading this book. I can’t wait to read the next book in this series and I also hope we find out more about Pia as well as there is definitely something going on there and more family secrets to unravel.