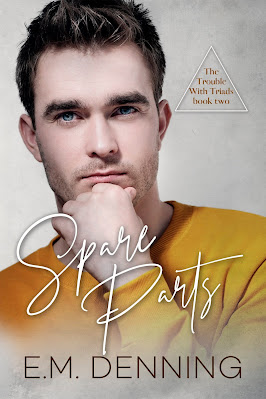 From the captivating cover to the very last word in the book, I was captivated by this best friends to lovers story.  Whether you call them a triad or a throuple, you will meet and fall in love with childhood friends Ari, Killian and Hunter in Spare Parts - One of my favourite quotes sums it up perfectly: “This is the best, worst idea I’ve ever had.”

What happens when three best friends take a two-week vacation?

Hunter Steele is about to find out.

Hunter always thought he felt attracted to women. For a while, he’s felt as straight as hot spaghetti, not straight at all.

His best friends Killian and Ari don’t see it coming, but when Hunter makes his move, they’re all in. The three friends become more inseparable than ever, sharing things they never thought they’d reveal.

Two weeks of euphoria in a sun soaked paradise isn’t enough to solve their problems. Insecurities still seep into their relationship. Hunter has to come out and fears what may happen. Killian doesn’t believe he’s enough for one man, let alone two, and Ari has to hold them all together, doubts and all.

First of all, I absolutely love that this was written in triple voice - each chapter following one of the men as they discover how deep their friendship and relationship run.  I also love that the characters are still best friends and the writing clearly shows that.

"Ari shot Hunter an amused look. “Really? Have we reverted to second grade humor?” “I’ll have you know, I was a fucking hilarious seven-year-old.” “You still are.” Killian laughed and paused in front of the bookstore."

EM Denning describes herself on Facebook as an "Author of endearing filth and schmoopy sex.98% Delightful 2% WTF" and really, this book matches that description perfectly.  Spare Parts needs to be part of your Summer TBR list, along with the previous book in this series, Spare Room, however the characters do not cross over so it can be read as a standalone book as well..
5 Stars ARC Romance Triad