I struggled a little to write this review because the story felt like it was rushed in places and the character development was really good with some characters and less so with others. GR Lyons is a new to me author and I found them through an ARC of the Destination Daddies series that I've been reading, loving and promoting. 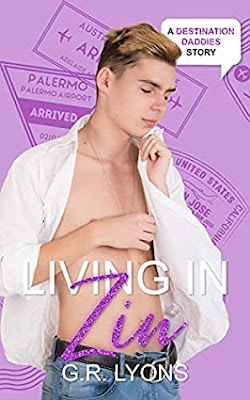 Tricked into a wine country vacation with his best friend and his enemy. In walks a virgin, and their love triangle is about to implode.

Maverick Jones has been secretly in love with his best friend almost since the day they met. But Beau is married to Dakota. Who has history with Mav.

Accepting Beau's invitation to visit sounds like a recipe for disaster.

But Mav never could refuse Beau anything. Not even when he finds out Beau lured him there for a singles retreat, hoping to help him find love.

When a shy virgin walks into their midst, and all four of them wind up in bed, it becomes harder for everyone to keep their secrets.

And for Mav, opening his heart could mean losing everything.

I struggled with a star rating and my feelings for this book.  I understand that it's tough to write a balanced polycule relationship in a typical novel length, and for me this time, it was missing something in the characters - For Beau, it was a true daddy vibe - he let Dakota get away with a ton of bad behavior with just a tut-tut - heck Dakota even had to ask to be spanked!  For Dakota, he was like an oversexed puppy and than completely the opposite when he saw 'triggers' in Ryder - I know bdsm relationships often happen quickly but I felt that Dakota in particular was hyper focused on sex with a trans man, to the exclusion of the other potenial character building plotlines.  For Ryder, it was that the character had too much going on - he was trans, maybe on the spectrum, a virgin... and his first sexual experience was a rushed foursome with a yappy boy and two hesitant daddies...  Mav was probably my favourite character, but still lacked something in the daddy area for me... I guess what it really comes down to is that I didn't like their lack of communication and serious thought throughout the book...  but I also really enjoyed parts of the book - the growth and development of the characters who were writers, some of the flow, the humour...and the end was a mostly satisfying HEA.