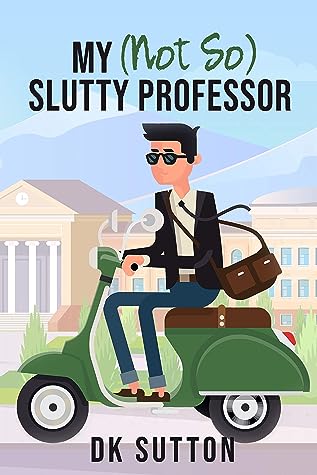 Sometimes you need to read a book that turns convention on it's head and changes the rules.  Sweet with building heat is the best way to describe My (Not So) Slutty Professor as Maddie goes after what he wants from Reid, the sweet professor.
From the Author:
Maddie
I’m a sucker for nerds. So a biology professor who wears geeky ties and doesn’t realize how hot he is, puts every part of my body on high alert. It also means I’m failing his class. There’s only one way to get him out of my head so I can focus. Seduce him.
Turns out that boyish innocence isn’t an act, and while Dr. Reid Emerson is a genius, there are many things he’s never learned. His eagerness to catch up takes my breath away. Will he let me be the one to teach him?
Reid
Maddie Evans reminds me of every popular guy I’ve ever known: charming, persuasive, and used to getting exactly what he wants. But there’s a part of me--a part tired of being the only inexperienced person on campus —that doesn’t care. A flash of skin during our study sessions sparks a fire I can’t put out. I want Maddie. And I want him to teach me…everything.
We strike a deal that has me questioning my sanity, my ethics, and everything I ever believed in. I can’t resist him but being together is risky. Maddie could lose his spot in grad school, and I could lose the thing that keeps me going every day. Teaching.
Is this experiment doomed to fail or together can we pass the ultimate test of love and sacrifice?
My review:
If you're looking for a book that smolders with a potential forbidden romance between a cocky student who is crushing on his clueless professor, you've found the right book... and I'm glad it's just the start of a series, since there are so many side characters who need a HEA.

This book was a quick and easy read, but hard to put down because you never knew when internal or external forces would cause Reid and Maddie to derail their budding relationship and what would bring them back together.

Definitely written with way more sweet than heat, so expect the slow burn.