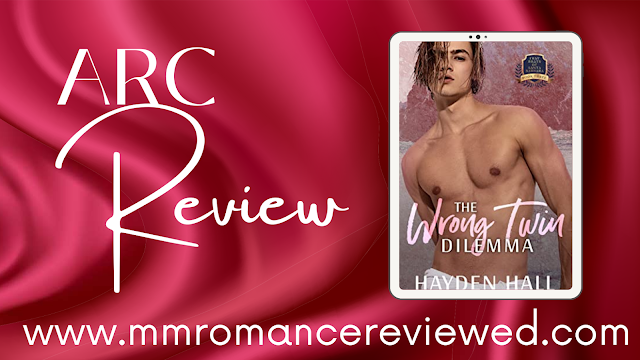 The Wrong Twin Dilemma is the third book in the Frat Brats of Santa Barbara series, featuring a gay awakening and a man that fell for the wrong twin and now has to make it right. 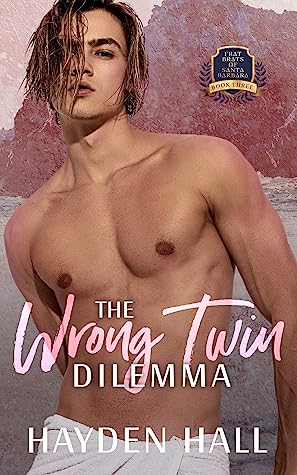 He's as off-limits as a guy can be. So why do I want no one but him?

Of all the guys in the world, I just had to fall hopelessly and irreparably in love with my twin sister's boyfriend. No amount of parties with happy endings can put him out of my mind.

Gabriel is also a dork, but he's a hot as all hell dork. Somehow, he's both a nerd and a jock and he pushes all my buttons. But he's straight. He shouldn't attract me the way he does. And did I mention they've been dating for two years? Yeah… They're all but married.

I'm officially the worst brother – and human, let's not pretend – in the history of ever.

And when my genius of a sister comes up with a bulletproof plan to help me pass my exams by convincing Gabriel to tutor me, I discover that my big, beautiful dork hides a secret even more ruinous than my own. The way he looks at me when we're alone is almost all I've ever dreamed of.

But how many hearts will shatter if I take what I want? Is it not better that I let my love die quietly?

I hate wanting him.

I'm a hot mess and he's off limits. We are a disaster in the making.

I can't say no to tutoring London. It would look like I'm hiding something, which I'm totally not. But if I were hiding something, it would not be easy to keep it hidden once the lessons begin and we're alone.

He crawls under my skin before I know it. He fills my mind with his rosy lips, high cheekbones, and sculped muscles. His male muscles, which I totally don't like. Except, when I'm alone, letting him into my thoughts is a comfort I desperately need.

The more I'm with him, the more I see I might be dating the wrong twin. But there's no easy way out of it. There's no happy ending for anyone here. Unless...

Unless I do what I fear the most and own up to the truth: London is all I ever wanted.

The Wrong Twin Dilemma is the third book in the Frat Brats of Santa Barbara series. It features one dorky, straight jock, one player with a bruised and tender heart, a whole lot of pining, a journey of discovering new sensations (wink, wink), and a grand finale to resolve the mess they make. There is NO CHEATING of any sort and there is a happy ending for EVERYONE involved. The book can be read on its own, but it’s just more fun to start with The Fake Boyfriends Debacle.
Sarah C's Review:
I've read a few books by Hayden Hall in the past, and I was excited to dive into this one. Because I love a good college romance and I loved the summary. And this book delivered both of them.

This is the love story between London, an out and proud self-proclaimed fuckboi, and Gabriel, a man who until recently believed himself to be straight. Oh, and at the start of the book, Gabriel was dating London's twin sister, Elle. But don't worry - there is absolutely zero cheating in this book. Instead, the fact that Gabriel is with Elle is handled very early and very well - but no spoilers as to how that all plays out.

The chemistry between London and Gabriel is very much there, something tangible that you can read coming off the page. Their spicy scenes are incredibly hot. Their relationship is very sweet. My only problem is that I didn't really believe how deep they claimed it was, which knocked off a star for me. It was supposed to be this incredibly deep and abiding love, but it felt very surface level for me throughout much of the book - but that could be because of how out of nowhere it came from Gabriel. He went from 0 to 250 seemingly overnight and I don't think my brain had time to catch up.

However, that is not to say that the relationship wasn't beyond adorable and I wasn't cheesing so hard my cheeks hurt by the epilogue. Nor is it to say I could put the book down at any point while reading it.

The Wrong Twin Dilemma is dual POV, high steam, and low angst. It is the third book in the Frat Brats of Santa Barbara series, but can be read as a standalone. I know this because I read it as a standalone and didn't feel as if I were missing anything.

Heather's Review:
I will preface this with the fact that the initial story has Gabriel in a MF relationship - and while it's very sweet, it just started me off on the wrong tone...but once we got to the meat of the story, London and Gabriel had great chemistry and it was fun to watch them get together...
Most of the angst in the book surrounds Gabriel and his father and while there is no on page homophobia, it's certainly implied.  Otherwise, this is a truly low angst book with a sweet and steamy gay awakening and a friends to lovers trope.
Rating: 4 Stars
The Wrong Twin Dilemma  is currently available as an e-book and can be read as part of your Kindle Unlimited Subscription
4 Stars College Contemporary Gay Awakening Heather KU Sarah C Series