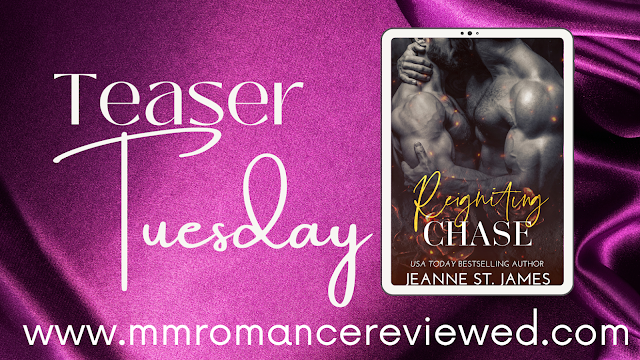 Today's teaser from Reigniting Chase, which releases on July 30th and I can't wait to read it - especially after glimpsing both the raw pain and the snarky humour in Chase's excerpt below... 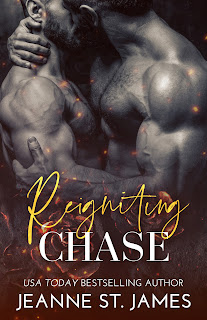 An unexpected collaboration between two authors that’s hot enough to spark a fire...

After an excruciating loss, I’m desperate for a fresh start.
Away from the painful memories.
Away from everyone I know and anyone who knows my story.
That’s how I end up in Eagle’s Landing, Pennsylvania.

As a bestselling author, my main reason for moving to a remote mountain cabin is to overcome the writer’s block that crushed my creativity for the past two years. My hope is to rediscover my words in the quiet, small town where no one knows me. Or my past.

A place where I can blend in enough that I become invisible.

Even though Chase, one of my favorite authors, insists he wants to be left alone, I refuse to let him wallow in whatever’s drowning him.

As a local bookstore owner and author myself, I’m intrigued by the man who’s a master of the written word. Unfortunately, his social skills could use a lot of work.

Even so, I’m determined to pull the irritable and frustrating man out of the dark pit he’s fallen into and back to the surface, no matter how hard he fights it. I only hope dragging Chase down that fiery path just might reignite his spark and that I don’t get burned in the process.

Note: Reigniting Chase is a slow-burn, emotional romance that deals with love after loss. Please check the content warning before reading or purchasing. It can be found at the beginning of the book (accessible by Amazon’s “look inside” feature or by downloading the sample) as well as on my website here: https://www.jeannestjames.com/regnitingchase. This standalone gay romance has a guaranteed HEA, no cheating and no cliffhanger.

I paused the fork halfway to my mouth. So far, I had only made a small dent in the diner’s belly-busting breakfast special. It was criminal how much food the server had delivered for five bucks.

Five freaking bucks. On Long Island, it would have cost me at least fifteen.

For only two more dollars, the coffee came with unlimited refills. If I could mainline that welcomed caffeine right now, I would.

My whole body ached and I was exhausted, not only from sleeping like shit in the motel but from tackling the seemingly endless job of cleaning the cabin from top to bottom. I didn’t want the furniture I purchased down at a mom-and-pop store in Picture Rocks to be delivered until the place was completely spotless and all my unwanted roommates had been effectively evicted.

While I liked bats and knew they were beneficial, I just didn’t want to share the same space with them. If they returned to sleep in the rafters today, then I needed to find how they were getting in since I had secured the broken window with plastic-sheeting.

But all of that wasn’t what made me pause my eating, it was the man across the diner who wouldn’t stop staring.

Like me, he also sat alone, but unlike me, he seemed to know everyone in the diner. A local just like the rest of the patrons and employees there.

The first morning, all eyes had turned in my direction as soon as I walked through The Eagle’s Nest’s door, but now the waitresses were used to seeing me since today was my third day eating in the diner, for both breakfast and a late dinner.

The food was good, the prices and attentive, friendly service even better.

Even one of the thirty-something-year-old waitresses had tried flirting with me. She had no idea she was barking up the wrong tree. Even if I was on the dating market, she was playing on the wrong team. While I had the utmost respect for women, I simply didn’t want to sleep with them.

However, the man who kept staring at me was most likely not on my team, either.

Was he staring because I was simply a stranger in a close-knit community where everyone apparently knew everyone?

It couldn’t be because I was gay. While I had never hidden it, I also didn’t flaunt it and most women, when I broke it to them gently, were shocked to find out the truth.

I’d heard, “My gaydar must be broken,” more times than I’d ever wanted to.

Even so, dating wasn’t on my agenda anytime soon. Or ever, since I had no plans on dating anyone ever again.

Life would be easier that way. Plus, at this point, being a team player didn’t matter, I preferred to remain a free agent.

Ignoring the man, I finished shoving the forkful of scrambled eggs into my mouth, wondering when the guy would get bored with watching me and lose interest in whatever had caught it in the first place.

Trying to ignore the rude man, I stabbed a piece of sausage, also shoving it into my mouth and chewing. Sucking down half a cup of black coffee, I hoped the guy would simply fuck off.

Finally, unable to ignore him anymore, I dropped the fork on my plate with a clatter, tipped my head down and rubbed my forehead. I steadied my breathing in an attempt to lower my quickly rising blood pressure.

I only wanted to eat in peace. I wasn’t here to make friends, or even enemies.

I wanted to be left the fuck alone.

But of course that wasn’t going to happen.

Preorder your copy of Reigniting Chase today, or add it to your Goodreads TBR so you'll be reminded to grab it with your Kindle Unlimited Subscription!