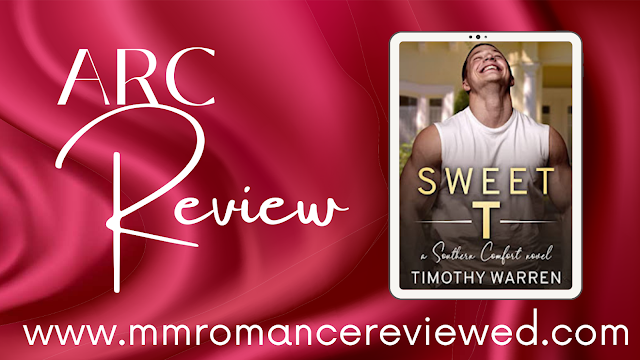 Sometimes a bad thing can lead to the best of things. Sweet T is the start of a new series in a small town full of healing with found family and love.
From the blurb:
"Maybe guardian angels work both ways." 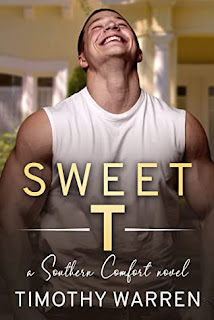 Tucker Shepherd is restless, living in the shadow of his family’s accomplishments. Nightly, he tends bar in the tiny town of Spoon while everyone else seems to be moving on.
Evan Harbuck is on the road to Atlanta to fulfill his dream of acting. Detoured along the way, he questions his passion and the meaning of success.
One stormy night, Tucker finds Evan broke and bleeding in his tavern’s parking lot. Tucker takes him in but soon discovers his nurturing may be reciprocal. With Evan there, Tucker’s little world is suddenly a whole lot brighter—but will it be enough for Evan and his big-city dreams?
Sweet T is a hurt/comfort romance between two men questioning their purpose in life. It is the first novel in the Southern Comfort series set in the tiny town of Spoon, Georgia. It features characters from future novels in the series that may enhance your enjoyment but is easily read as a standalone.
SNik's Review:
First in series (Southern Comfort). Hurt/comfort. Found family.
Evan is on his way to Atlanta hoping to make a career of acting, but suffers an ill fated interaction and unfortunately gets waylaid in the small town of Spoon.
Bar owner Tucker’s family has always lived in Spoon and he’s happy there with a supportive group of family and friends, but when he helps Evan there is a chance for love in his life too, but only if Evan stays or Tucker leaves his family behind.
The real foundation of this book is the supportive and diverse cast of secondary characters  and that makes the story sweet.
After Evan’s trauma the love story moved fairly quickly and into steamy territory which may not work for some readers.
Evan and Tucker do share and communicate their feelings and backgrounds pretty thoroughly during the early stage of their friendship so that it isn’t just a physical attraction.
The relationship between Evan and Tucker is not angsty although there is angst with other individuals, and the writing is good and engaging.
Sweet T is a good introduction to the town of Spoon and its inhabitants for the series, and the story kept me with the likable main characters and found family.
Rating: 4 Stars
Heather's Review:
Sweet T was an interesting read... first off, please check with the author if you have triggers, because the recall of trauma is strong for a chapter and the consequences and choices do continue to pop up right through the book in various forms...
With that out of the way, Sweet T was a very interesting opposites attract read that featured hurt/comfort, sweet, a lot of steam and some excellent world building and communication between the main characters...
Other than Evan and Tucker, I think my favourite thing about the story is the town of Spoon!  I'm looking forward to getting stories from more of it's residents and seeing how the mayor's big plans come to fruition...
This book wasn't angsty between main characters but there was a fair amount of secondary angst and I will admit that there was a part of the story that made me cry....
I definitely recommend checking out Sweet T, with the cautious caveat that it will be emotional and could be triggering...
Rating: 4 Stars
Janet's Review:
Loved Sweet T!!!
Evan is hitch hiking his way to Atlanta when he is picked up, he ends up assaulted and dropped off at a bar. Tucker and his friend find Evan and take him to the hospital.
I loved Sweet T, Tucker’s nickname. He was a sweet, fluffy marshmallow! He has a heart of gold, thinks good of and will help about anyone.
At times I felt Evan was taking advantage of Tucker, it took me a bit to like his character.
Loved all the secondary characters, especially Pedro! Totally disliked Tucker’s father. He was more concerned with his stepson other than both his boys.
Evan did redeem himself in my eyes by the end of the story. Overall, well written with a nice pacing that flowed well.
Rating: 5 Stars
Sweet T is currently available in e-book and paperback and can be read as part of your Kindle Unlimited Subscription
4 Stars 5 Stars ARC Contemporary Found Family Heather Hurt/Comfort Janet KU Opposites Attract Series small town SNik Trigger Warning