Spirit of the Ocean by J.S. Grey 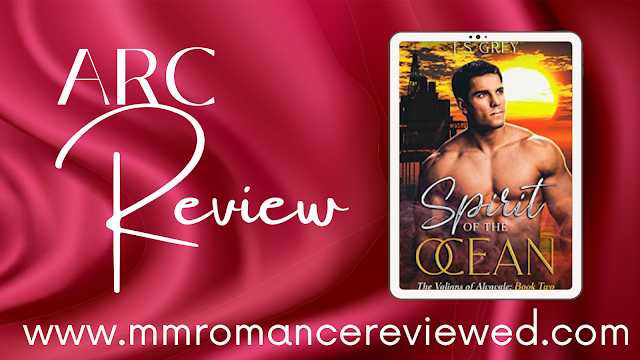 Spirit of the Ocean is the second Alvavale book, and features lost love and second chances.  Myths and magic.
From the blurb:
Journey back under the veil, into the oceans of Alvavale. 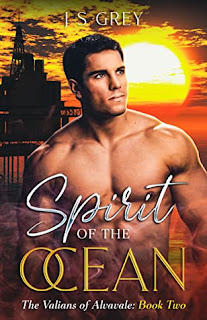 Mel Cadmus is the Merfolk prince of the icy North. He'd dreamed of spending his day swimming the oceans deep with his best friend, Ax. Merfolk defenders of Alvavale, both of Royal blood, bound by honour and duty to serve the great spirit, Gaia. A tragedy destroys his dreams when his best friend is suddenly taken from him. Years later, as an unknown force from Jord threatens the very existence of Gaia, Mel must stop at nothing to save the great spirit and secure the barriers separating the worlds.
Heff Lisker, the son of mysterious billionaire oil tycoon, Janus Lisker, and owner of Lisker Crop wants nothing more than solace and peace, to be left alone to operate his father's oil platform in the Sea of Okhotsk. Now, however, his world is about to be turned upside down, when his father's new hypersonic drill is set to go deeper into the earth than ever before, unleashing a power the likes of which the world has never seen!
Mysteries unravel in this heart-stopping thrill ride through the Oceans.
Can Mel and Heff work together to save Gaia, and the worlds as they know them?
Spirit of the Ocean is about to make Herself known.
Sheena's Review:
I'll admit to being a little worried when I started this book, as I realised I hadn't read the first one, and thought I'd be a little lost but decided to go on anyway. I needn't have worried, as I loved this book. This is a new to me author, and I just clicked with this book. A good yardstick for me to tell if I love a book is if I can't wait to read it, and will sit down with instantly when I get home from work as I cannot wait, and that's what happened here.
I love the world the author has built here, I could practically see Alvavale and could imagine it vividly. I really liked the idea that so many of these mythical characters might just be living in a parallel world adjacent to ours where fae, and mermen and who knows what else are real. The scope for more stories in this world are endless and I'm up for more, if this story was any indication.
Right away I liked Mel and Ax, there was that pre-existing connection between the two and I was rooting for them to be together at the start, no lie. I felt Mel's pain when Ax was ripped away, keenly. I wondered how it would all tie together, and I did have a suspicion and was glad when it was true.
There's a fair bit of heat here too, I'm still not sold on Jay, for some reason but I liked all the other characters, especially Heff. The author has clearly done their research, and I liked the environmental aspect and how Heff especially was mindful of that.
Spirit of the Ocean was just so well written and I disappeared into the story and couldn't put it down until I knew how it ended. If I have one criticism, it's that it all ended rather fast, the second half of the book felt a little rushed but I never felt short changed with the story.
I'm here for this series, and hoping for more in future.
Rating: 4.5 Stars
Spirit of the Ocean is currently available in e-book and paperback and can be read as part of your Kindle Unlimited Subscription
4.5 stars ARC KU merman mystery Paranormal Series Sheena Standalone