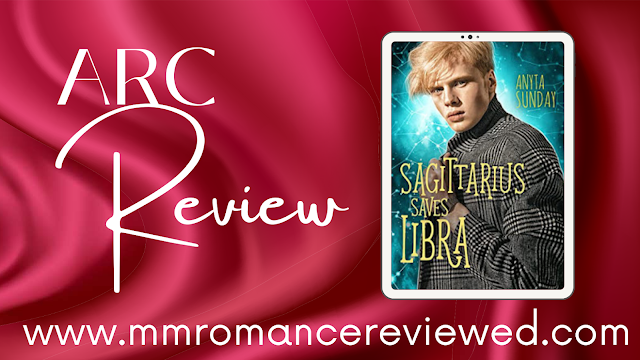 "SHEER. WRITING. BRILLIANCE.
Any book that makes you want to read it in a nonstop fashion can only be described as brilliant." Our reviewer, Zakiyya, gives enthusiastic praise for Sagittarius Saves Libra.
From the blurb:
True love is on the horizon, Sagittarius. It’s a good time to step out of your routine and into the unknown. 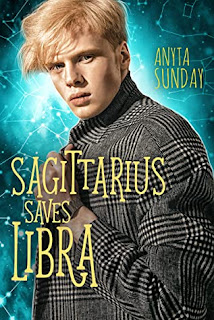 Jason Lyall wants someone to come home to, someone he can be his most ridiculous self with. Someone who loves him regardless. But no matter how hard he tries, he can never quite make that connection, and now his last girlfriend has moved on—she’s engaged.
So when his identical twin begs him to swap lives for a few weeks, Jason can see the appeal. Suddenly he’s living another life in a tiny Australian town, contending with weird, wild, and wonderful things the likes of which he’s never encountered before. Like spiders. Like snakes.
Like his new neighbour, Sergeant Owen Stirling, who is all kinds of . . . suspicious.
Prepare to be caught in a merry mix-up, Libra. It’s a dance of side-stepping and seduction.
~~~~~~~***~~~~~~~
„Sagittarius Saves Libra“ is an opposites attract, fake identity, slow burn MM romance with twin shenanigans. This small town romance is the sixth book in the Signs of Love series.
The books in the Signs of Love series are standalone romances, and can be read in any order.
LEO LOVES ARIES (bi-awakening, friends to lovers, clueless as fuck)
SCORPIO HATES VIRGO (boy next door, fake-enemies to lovers, mistaken identity)
GEMINI KEEPS CAPRICORN (fake fiancés, friends to lovers, off-limits lover)
PISCES HOOKS TAURUS (marriage of convenience, opposites attract, age-gap)
CANCER SHIPS AQUARIUS (manny, widower, opposites attract)
SAGITTARIUS SAVES LIBRA (fake identity, twin shenanigans, small town)
Tropes: Opposites attract, fake identity, twin shenanigans, slow burn, small town.
Jacquie's Review:
Full of that funny obliviousness that charmed me in Aries Loves Leo, Sagittarius Saves Libra was a fantastic read.
Jason and Carl swap lives because of Carl's ex getting married (Pete's obliviousness to the pain he was causing, not so cute) and Jason immediately gets found out by Carl's neighbour, Owen. Owen though, goes along with the charade.
Jason was such a fun mc. The whole book is told through his pov and he just doesn't seem to hear some of the things he says! All the double entendres and flirty comments were hilarious.
Full of crazy situations, Jason ends up having to fake a relationship with Owen to save face as Carl in front of Pete. I really felt for Carl and hope with the tease towards the end, that there is a story there.
Only it's quickly apparent that their fake relationship isn't fake at all. Their relationship quickly turns steamy and full of feelings.
A special shout out to Mary and her lie detecting skills.
Loved this so much.
Rating: 5 Stars
Zakiyya's Review:
With its richly developed characters and a story that captures and keeps your attention throughout – this book is most definitely one of my best reads so far for this year.
Sergeant-Owen-Stirling-Sir....😅🤣😂
OMG, I could not help laughing every time I read that.
Jason was so obliviously hilarious and I immediately fell in love with him.
The fact that he got to be with the sexiest and most amazing man ever, made this all the more satisfying.
I thought I read characters that fit perfectly before... but Jason and Owen, completely and unequivocally exceeded any and all expectations I could have ever had.
Sagittarius Saves Libra is a must-read that I absolutely cannot recommend enough…💙🥰💙
Rating: 5 Stars
Janet's Review:
I have seriously adored all the books in the Signs of Love series, but I think I loved this one the most. It made me smile and laugh so much.
Sweet, fun a quirky character falls in love with his new friend. Loved the flirting and banter! I’ve always liked the fake-dating troupe, but the mistaken identity troupe might be my new favorite.
Overall, fantastic!! A seriously fun read. It was well written with pacing that didn’t let me go.
Rating: 5 Stars
Sagittarius Saves Libra is currently available in e-book and paperback and can be read as part of your Kindle Unlimited Subscription
5 Stars ARC Contemporary Fake Boyfriends Jacquie Janet KU Opposites Attract Series slow burn small town Standalone twin swap Zakiyya