A vampire walks into a hospital…
I just loved this book. I love a good fated mates story and this was just perfectly done, with the right amount of doubt and time for the relationship to build.  - Reds Book Reads on Roman.
From the blurb:
Danny Kingman is used to fending for himself. Working nonstop as an ER nurse to pay for his mother’s care, he’s been putting his own life on hold since he can remember. But when an unbelievably hot, 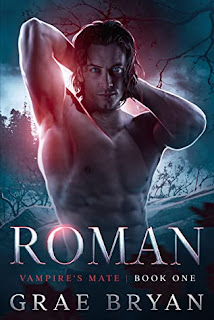 strangely intense man saves him from a mugging, Danny has a feeling everything is about to change. Especially when that man suddenly pops out a pair of fangs.
Roman Mourier has been wandering aimlessly for decades, waiting for the inevitable day when the last of his humanity leaves him, and the demon inside him takes permanent control. He doesn’t believe in fated mates, or the myth that there’s a soul out there that could tether his humanity to him. Until he feels a strange pull to the lovely young man at the hospital, and hope stirs in him for the first time.
But Roman has demons other than just the one inside him. Is he strong enough to keep Danny safe from the past that haunts him? He knows one thing for sure: now that he’s found his mate, he will do anything to keep him.
Reds Book Reads Review:
I loved Roman and Danny and the way their relationship developed during the book. I also loved the underlying storyline with Lucien and Soren and also Gabe who all have some really interesting potential in future books.
I’m really looking forward to the next book in this series. Roman is such a great book!
Rating: 5 Stars
SNik's Review:
A vampire who just happens to be his fated mate? Sign Danny up! Sweet nurse Danny finds the cure for loneliness in caring and possessive vampire Roman.
First in series (Vampire’s Mate). Fated mate. Hurt/comfort. Dual POV.
Roman is a centuries old vampire constantly on the move trying to stay ahead of a past that haunts him. When Roman meets ER nurse Danny in a small town in Colorado he realizes that the myth of fated mates might be true - he is drawn to Danny, wanting to care for the young man and possess him at the same time.
There is nothing new or unusual about this story, but it was an enjoyable read that was entertaining and sweet.
I appreciated Danny’s ability to accept everything about meeting and falling for a vampire - no angst there - and being fated means that Roman and Danny are attracted and easily fall into a relationship.
The story has a bad guy, a good secondary cast, background (mostly for Danny) for the emotional pull of the main characters, and some steamy interactions (with biting of course).
Good start of a new series and debut for a new author.
Rating: 4.5 Stars
Janet's Review:
Roman is a fated mates, paranormal romance.
Loved, loved, loved Danny and Roman!! Danny is a strong and caring man who is working as a nurse and taking care of his mother.
Roman is a centuries old vampire that is running from his past. The story has quite a bit of drama. It’s actually a sweet story.
Overall, fantastic!! It was well written and an engaging read. Even though it was a paranormal romance there was a few things that felt realistic to me.
Rating: 5 Stars
Nicole's Review:
Danny and Roman were perfect for each other, so it's a good thing they are fated mates!  Their story had just enough Daddy/Boy element to tick that kink for me as well, which I loved.
I really think the author did a fantastic job with the history between Roman and Luc to create a believable and redeemable villain for this story.
I am looking forward to Soren's story, and hopeful that we will get the same level of storytelling.
Rating: 5 Stars
Roman is currently available as an e-book and can be read as part of your Kindle Unlimited Subscription
4.5 stars 5 Stars ARC debut Fated Mates Hurt/Comfort Janet KU Nicole Paranormal Reds Book Reads Series SNik vampire