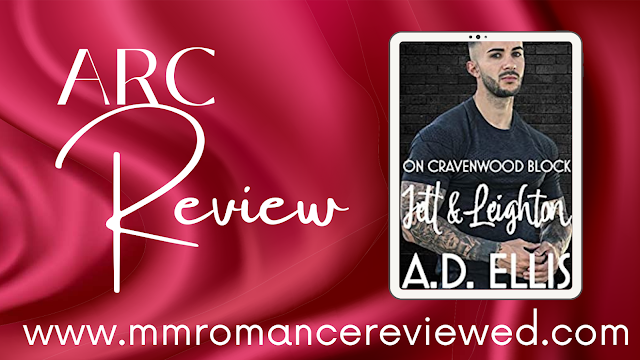 I was so excited by the party celebrating Jett & Leighton's release that my review post stayed in drafts!  Trust me, it wasn't that I want to horde these two sweet characters all to myself... nope... definitely... not... 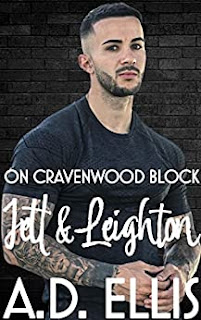 Jett is accustomed to people thinking he’s an intimidating, aloof loner. He doesn’t really mind, even though finding a special connection to someone would be nice. Opening his own tattoo shop on Cravenwood Block is a dream come true, but he isn’t prepared for the determined little ray of sunshine who walks through his door and turns his entire world upside down.
Leighton knows better than to let himself get involved with a straight guy again—been there, done that, got the t-shirt and some stylish baggage he’s been lugging around ever since. However, the moment he lays eyes on the new tattoo artist on the block, he can’t help the instant pull toward the man.
Meeting Leighton throws Jett for a curve. He’s forced to recognize he’s got a lot to learn about himself, and he quickly realizes he actually likes the man he’s uncovering. Leighton knows it’s dangerous to let his heart hold onto hope, but he can’t shake the feeling something good is just around the corner.
*Jett & Leighton: On Cravenwood Block is a steamy, opposites-attract, bisexual-awakening, roommates-to-lovers M/M romance featuring a sexy-as-sin tattoo artist and a fresh, flashy barista with a smile that lights up the room.*
Heather's Review:
Jett & Leighton was such a sweet and steamy bi-awakening story!  I love how Leighton starts out just putting himself in front of Jett, wearing his crush on his sleeve and how Jett slowly comes around to just how much he likes it...
While there is an instant friendship between these two, we watch them circle each other in a slow burn pattern with just the right amount of angst and introspection... I thought that the book developed well and the characters were ready for what was to come next... at each step.
I will say that I guessed the plot twist fairly early on, but the secondary story was adorable!  Jett & Leighton also introduced us to the other roommates On Cravenwood Block and I can't wait for the rest of their stories!
Rating: 5 Stars
Laora's Review:
I liked the book and I am looking forward more in the series.
A.D. made both Jett and Leighton very likeable and has created a framework with enough characters to set up this new series. Jett is realizing he is attracted/ has a click with Leighton . And has to figure out what his sexual identity is. He comes to demisexual and bi or gay. Leighton is hesitant to start something with a man who perceives to be heterosexual.
Sweet moments: Grandpa and Milton
Least liked part : 'my poor little homo heart' several times and 'greedy little homo h***'; the first was used as internal dialog and felt crude and unnecessary. The second was meant to shock, but still.
Rating: 4 Stars
Jett & Leighton is currently available in e-book and paperback and can be read as part of your Kindle Unlimited Subscription
4 Stars 5 Stars bi awakening Heather KU Laora Opposites Attract Roommates to Lovers steamy