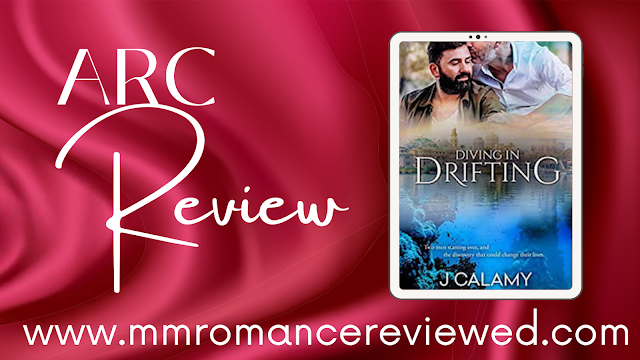 CrazyPinkIrish says that Drifting is "definitely not your typical mm romance but joyous and sweet nonetheless."
From the blurb:
Two men starting over, and the discovery that could shatter their worlds. 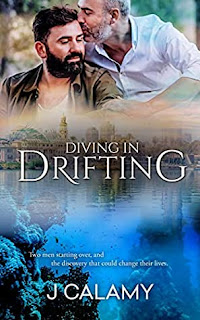 Artist and antiquities expert Cole Hadley is in a good place. Assistant Cultural Attaché to the US Embassy, Cairo, he’s over his divorce, rebuilding his confidence after years of fat-shaming and misery and checking off the first of his bucket-list items, SCUBA diving in the Red Sea.
Hank Ashton, bearded, built, the best—and meanest—divemaster on the Sea, is stranded in the dying town of Al’Shahin. He owes a local gangster a pile of money and is stuck teaching basic classes at a failing hotel to pay the debt, the dream of his own dive shop slipping further away every year.
Cole’s joy and wonder at Hank’s world cracks his carefully constructed shell, forcing him to realize how lucky he is. In turn, Hank’s lust for Cole’s body and care for his happiness go miles toward healing Cole’s bruised heart. Their shared passion for the marvels of the undersea world spills over into a sizzling affair…one they both know has an expiration date.
Until, in exploring the sea, they make the discovery of the century, one that could change both their lives. But their very different plans reveal just how little they know each other. Cole and Hank have to decide exactly what’s important to them and be brave enough to get it, if they’re to have any hope of resurfacing together.
CrazyPinkIrish's Review:
Drifting is a lot different than previous books I have read of this author and it kind of threw me for a loop really because it went from danger, seduction and thrilling organised crime drama to sweet and fluffy Instalove.
Cole was adorable and dealt with some harsh things due to being overweight but I love the way he handled the negative energy thrown his way.
Hank was hot, no doubt about that but I felt like he treated Cole as an almost fetish at times. The description of Egypt and all it has to offer was incredible and the author did such an amazing job it felt like you were there in that moment along for the ride.
Rating: 4 Stars
Drifting is currently on sale for 25% off the cover price!
4 Stars ARC Contemporary CrazyPinkIrish divorced mc Fluffy InstaLove sweet