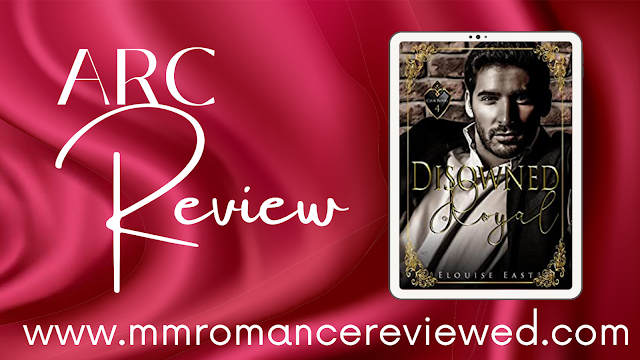 Elouise East's kinky royal family continues to engage and fall in love in Disowned Royal, the fourth of seven books in the Club Royal series...
From the blurb: 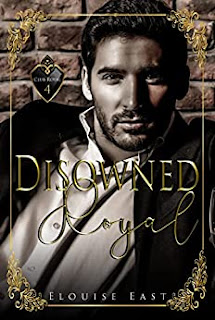 Life couldn’t get any more twisted and convoluted if it tried. Christian hates his parents as much as they hate him, but he never expected them to throw him in a cell when he blurted out he was bisexual. Their public image is important to them because it hides the transgressions they’ve subjected many people to over the years. People Christian mourn every day because he couldn’t save them. Reading is an escape, and one place gives him the solitude he needs to shore his defences - and the view isn’t too bad either.
Oscar is living his dream. The owner of a beautiful cafe slash bookshop slash library, he is never happier than when he is working, which is all the time. When Prince Christian becomes a regular, Oscar tries to stop his attraction to him, but the man is like a god. A haunted god, but nonetheless. His scrutiny of the man means he notices when Christian nears breaking point, but he has no idea what to do about it. Christian offers to find him a Daddy, but Oscar hesitates. Does Christian really want to help or is he feeling sorry for him?
When their attraction persuades Christian to take the role of Oscar’s Daddy for himself, can he keep Oscar safe when he goes up against the people who wish to harm those they love?
Disowned Royal is an MM book containing BDSM scenes and D/s dynamics in all forms. It also has lots of loving, friendships, family drama and, of course, a HEA.
Heather's Review:
I've been waiting to find out what Christian's story was and who his partner would be and in both respects, Elouise East did not disappoint!  First off, this story is best read as part of the Club Royal series and has an ongoing storyline that is especially important to Christian's story and his place in the royal family...
I absolutely love Christian's private side... the real person that Oscar sees and that we've glimpsed in previous books - the voracious reader, sweet caregiver and loyal family guy...   Oscar is such a sweet guy too - successful business man with a little side just crying out to be loved by Christian...
As with all the Club Royal books, there is more going on than a simple relationship and the depth of this story line keeps me coming back over and over again... I can't wait to see how things continue in the next book!
Rating: 5 Stars
Janet's Review:
Disowned Royal is the fourth in the is Club Royal series and best read in order of the series.
Christian is a fantastic character! He is strong, stoic and only wants to protect those who he loves.
Oscar is the owner of a café/bookstore and has never been happier. Prince Christian has been coming into his bookstore/library, reading to escape the real world.
Loved, loved, loved Christian and Oscar!!! I’ve been waiting patiently for Christian’s story and the author did not disappoint! I cannot wait for the next in the series!
Overall, fantastic!! Well written with great pacing that makes it hard to put down the story.
Rating: 5 Stars
Disowned Royal is currently available in e-book and paperback and can be read as part of your Kindle Unlimited Subscription
5 Stars ABDL BDSM Daddy Heather interconnected Janet KU little royal Series