Lesetiger calls Sweet Nothings, "a great series opener with awesome world building. Wonderfully written and really cute."
From the blurb:
Sam Baker couldn’t be more normal. He’s a teacher at the local middle school and the most exciting part of his day is dealing with a classroom full of hormonal preteens. His life takes a turn for the weird one stormy night when he finds a small boy on his doorstep. A boy who growls, flashes unnaturally blue eyes, demands for Sam to call the alpha - whatever that is - and gives Sam the one name he wishes he could forget: Vaughn Jerrick. 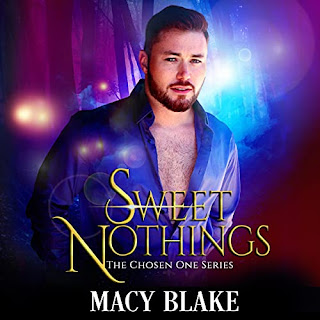 Vaughn Jerrick is the alpha to a pack of wolf shifters and a doctor to the supernatural world. After sharing a steamy one night stand with Sam years ago, Vaughn couldn’t consider the possibility of a future with the man, no matter how much he wanted him. Bringing a human into his world is against the rules, but one phone call changes everything, and Vaughn finds himself face-to-face with the man who could give him everything he’s ever wanted.
Rescuing one small child turns into saving six from a dark and uncertain fate, and although Sam doesn’t understand the world he’s been forced into, he would never turn his back on children in need, even if it means confronting his past with Vaughn.
As Vaughn and Sam join forces to protect the children put into their care, the future they’ve both dreamed of is within their reach, but first they need to survive the sinister force looking to rip away everything they’ve come to hold dear.
Lesetiger's Review:
I didn't know Macy Blake as an author before. But she has a wonderful writing style with a fascinating world building. Sweet Nothings is emotionally told and had me hooked from the beginning.
Macy Blake has created a great world where shifters live alongside humans in th e real world. When Sam finds a frightened boy on his doorstep one night, he just has to help. But this boy with unnatural eyes is asking for Vaughn, of all people, who just left Sam years ago after a hot one-night stand.
As a listener, I was immersed in a great described world full of people and shifters. I liked Sam and Vaughn from the start, they are both warm and very likeable and it's easy to empathize with them. It turns out that it's not just one kid in trouble, but several. The kids were cute as well as the overall story. I especially took Ollie and Henry to my heart.
Michael Dean's narration was on point - as always. He brought the story to life with many different voices - including those of the children. The emotions resonated with me as a listener and he was a pleasure to listen to. An interesting and entertaining audiobook that I am happy to recommend to others.
🎧Audiobook Review🎧
Overall: ⭐️⭐️⭐️⭐️⭐️
Performance: ⭐️⭐️⭐️⭐️⭐️ ️️
Story: ⭐️⭐️⭐️⭐️⭐️
Sweet Nothings is currently available in Audiobook, e-book and paperback and can be read as part of your Kindle Unlimited Subscription