Lesetiger calls Influenced "A beautiful story with a happy ending and a great voice."
From the blurb:
A million likes vs. one true love.
Bryce Bauman is one half of a famous influencer couple...until his boyfriend dumps him and puts the whole ugly scene online. 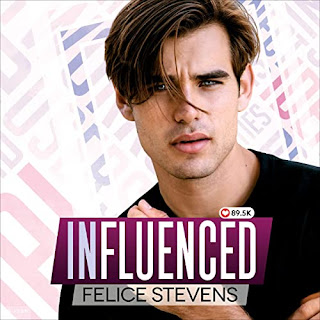 Several months later, Bryce is at the end of his rope—he’s lost all his endorsements, along with his so-called friends. Licking his wounds, he escapes to the tiny town of Serenity, Pennsylvania, where he’s surrounded by too much nature and quiet. And...the hot as hell owner of the bed-and-breakfast who makes him think there might be life beyond what’s on a screen.
Matty Wilcox has no time for spoiled brats or social media. He must keep the business running, his grumpy grandfather healthy, and himself deep in the closet. In his little town, there’s no way to come out to his friends and family and have things stay the same, so he’s better off alone.
Except life is complicated now that Bryce is staying at the bed and breakfast—he’s entirely too tempting and not as silly and shallow as Matty first thought. Giving in to his desire could only muddy the waters of the life he’s so carefully built. Any slipup would be dangerous for his business, his friendships, and most importantly, his heart. Besides, there’s no place for small-town Matty in Bryce’s big-city life. The two of them, together, don’t make sense.
Then again, since when does anything make sense when it comes to love—the greatest influencer of all?
From Lambda Literary Award-winning author Felice Stevens comes a sexy, slow burn small-town romance full of heat and heart. And a few groundhogs. And maybe a snake. But it's a little one...really.
Lesetiger's Review:
I was looking forward to Influenced by Felice Stevens, because she has an absolutely convincing writing style that always delights me. I was curious about Declan Winter as narrator, because I didn't know him before.
The author takes us to the small town of Serenity. There Matty, the owner of a B&B and Bryce meet for the first time. Matty has recently ended his long-term relationship with his girlfriend, so he is focused on his work and his somewhat grumpy grandfather. Bryce was a famous influencer couple along with his boyfriend, but Byrce ends up at the bottom when he is simply replaced. No job, no friends, so he treats himself to some downtime in a small town.
I loved watching these two get to know each other and realize that the other is definitely appealing. And I had to smile a few times at Bryce's take on country life. Delightful. But the story doesn't just offer sexy main protagonists, it also captivates with great secondary characters. I just loved the relationship that develops between Bryce and Matty's grandfather.
I love Influenced. Matty and Bryce are totally cute together and I loved the development of their relationship and the strong feelings.
Declan Winter has a very pleasant and very sexy voice. I love how he reflects the emotions and the voices he gave to the characters. He did a great job and was a pleasure to listen to. I look forward to more audiobooks with him as narrator.
This audiobook is highly recommended, a beautiful story with a happy ending and a great voice. 🎧Audiobook Review🎧 Overall: ⭐️⭐️⭐️⭐️⭐️ Performance: ⭐️⭐️⭐️⭐️⭐️ Story: ⭐️⭐️⭐️⭐️⭐️
Influenced is currently available in Audiobook, e-book and paperback and can be read as part of your Kindle Unlimited Subscription