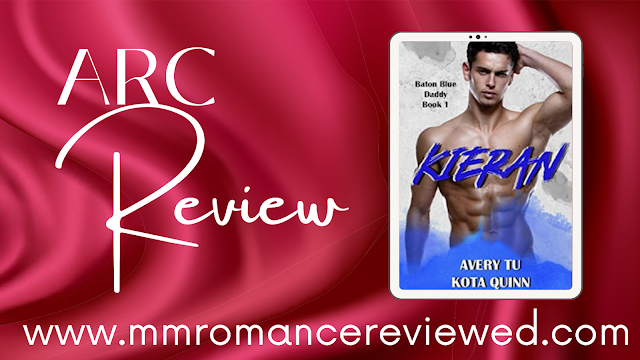 "Undoubtedly a great start for this debut writing duo." Our reviewer, Zakiyya, on Kieran.
From the Blurb:
As the CEO and founder of one of the world’s top makeup companies, Baton Blue Cosmetics, Kieran Kingsley has enough on his plate to worry about without having to take an arranged marriage into consideration. When he finds out his parents have plotted with another prominent family to get him hitched, he immediately seeks a way to call the whole thing off before word gets out. What he isn’t expecting is for Theodore Hudson to be so…attractive. 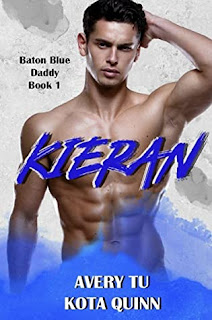 Theodore Hudson is a popular artist who’s spent years trying to build a life for himself separate from his family and their wealth. When his mother tells him he’s been matched with Kieran, he’s certain it’s part of a ploy to ruin his latest gallery showing and get him to return home. He has every intention of telling Kieran off when they meet, yet something about the other man makes it difficult to look away.
The two of them soon realize the best way out of this is to pretend to give their families exactly what they want, with a predetermined timeline and an end goal in sight. They can both walk away from this with everything they need.
But what happens when the thing they both start to need the most, is one another?
Kieran is the first story in the Baton Blue Daddy Series. This MM romance is an arranged marriage with enemies-to-lovers vibes. It involves light daddy kink, no age play and lots of chemistry. You can expect fun banter, fake dating and a secret employee who loves to air all the juicy gossip all over the company forum. This book can be read as a standalone and has a HEA.
Zakiyya's Review:
Kieran and Theo’s story – while not anything new - certainly holds your attention cos they were both very appealing characters.
The slight touch of angst with everything regarding Kieran’s ex was the perfect amount to make this a little more exciting.
I only wish we could have seen Kieran give an explanation to Theo as to why Kieran still had that painting and his ex’s picture.
I know Kieran gave his best friend, Dorian that explanation but I still felt it was Theo who deserved it.
Also, while the intended marriage was certainly planned by their families, not sure this could be classified an ‘arranged marriage’ technically since there was no marriage in the book at all.
But those things definitely don’t take anything away from the fact that I enjoyed this and will continue to read the next in the series…💙💙
Rating: 4 Stars
Heather's Review:
I have to admit, I was a little skeptical at the beginning of Kieran - about how it would flow and things would play out, but once I was a few chapters in,  I was caught- hook, line and sinker... and held until the end of the book and am now impatiently waiting for Baton Blue Daddy book 2 to come out!
This book has it all - fake engagement, second chance romance, a manipulative ex, some hurt/comfort and just a hint of daddy kink...
I quickly became invested in Theo and Kieran - although I wish they communicated with each other more, we do get pieces of the story by watching them interact with their best friends...
Kieran was a very quick read for me and I was definitely invested in getting Theo and Kieran to their HEA...
Rating: 4 Stars
4 Stars angst ARC arranged marriage Contemporary Daddy Enemies to Lovers Heather Series Zakiyya