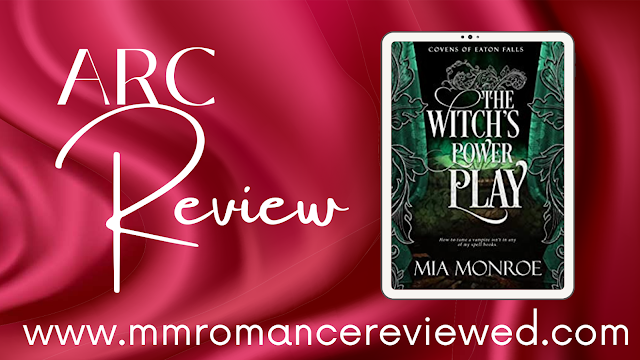 Mia Monroe is back with The Witch's Power Play, book 2 in the Covens of Eaton Falls series and we couldn't be happier. We are really digging her foray into PNR. 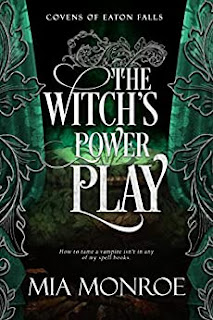 How to tame a vampire isn’t in any of my spell books.

My life changed forever the night my coven was attacked. I was scared and alone until my bestie Leo showed up. I trust him with my life. Good thing since he dragged me to the home of a notorious vampire. Even worse, another equally terrifying vampire is in charge of keeping an eye on me.

I did my best to comply and keep my distance from the stoic, domineering man who I shared a room with. I may have tried to flirt with him a couple times, a totally dumb move considering vampires aren’t exactly fans of witches. It didn’t work anyway. Once I was able to get away from him and back to the safety of my coven, I hightailed it out of there. I thought I would quickly forget him. I was wrong.

When we reunite, Beto let’s a surprising secret slip, leading me to make a decision that we both might regret. Who am I to deny a man his need to submit? Will Beto decide to trust me with his desires? Can I learn to keep a vampire in check? Don’t know, but I’m up for the challenge. If the war doesn’t tear us apart first.

The Witch's Power Play is an MM paranormal romance featuring a subby vampire who just wants to be good for someone, a sassy witch embracing his toppy side, a supernatural war causing havoc, a bunch of really annoying demons who show up at the worst time, and so much pining (at first). It is book two in the Covens of Eaton Falls series. Each book features a different couple with an ongoing conflict and therefore should be read in order

Presley was certainly a fireball of energy. He was so opposite to Beto, yet they simply adored each other. The book may have seemed sort of insta-lovey but it wasn't exactly. If you remember from book 1 the two spent a lot of time together as Beto was guarding Presley. The Witch's Power Play picks up where book 1 left off so we aren't privvy to what happened before except for what is told to us. We just know that there was definitely a spark between these two from the start.

The steam was high in this one with lots of flip floppy goodness. We meet a new major player in the battle with the demons, but we don't know much about him yet. Things are starting to heat up on that front with increasing attacks. Leo has his work cut out for him leading the coven and adjusting to his life as a hybrid vampire after the events of book 1. It also seems we are given a pretty good idea of the next couples in the series, but I won't tell you how. You'll have to read it to find out!

Heather's Review:
I adore the world that Mia Monroe has created in this series... so many finite details, so much history interwoven into the story and so many players in the cast... that being said, this book truly did focus no the romance between Presley and Beto and it was a true opposites attract story...
After being 'the other two guys' in Never Trust A Guy with Fangs, both characters step up in this book, both in their personal lives and in the war against the demons.  Their story was different enough from the first book, and the growth in Presley and the softening of Beto were perfect and dare I say it, sweet at times, but this book also brought out the heat!
I'm looking forward to seeing where this series continues to go and I'm hoping for at least one of the non-witch, non-vampire secondary characters featured in The Witch's Power Play to get his HEA soon!
The Witch's Power Play is the second book in a continuing series and while each book has a HEA for the featured couple, there is an overarching storyline that needs to be read in order to understand. Check out our reviews of Never Trust a Guy With Fangs to start your journey.
Rating: 5 Stars
The Witch's Power Play is currently available in e-book and paperback and can be read as part of your Kindle Unlimited Subscription
4.5 stars 5 Stars ARC Heather high heat Jacqueleen KU on going plot Opposites Attract Paranormal Series vampire witch