The Siren's Song (Legends of the Packs, #4) by Kaydee Robins 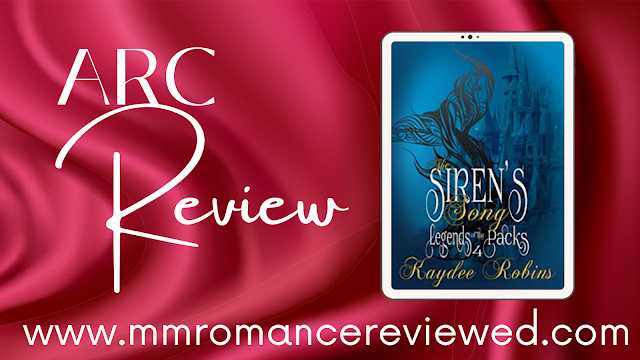 Kaydee Robins does it again! The Siren's Song is another book in the Legends of the Packs Series and it's just getting better and better!
From the blurb: 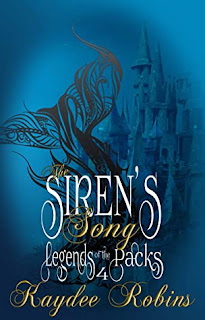 Two different worlds. Myths, legends, and enchanting songs. Will love overcome the sea that separates them?
Born after his kind hid away from the world, Erik has never left the sea. Shipwrecks tease him of a world he’s never known, a world that calls to him. Breaking the rules once too often, Erik’s father, the king, gives him thirty days to find a mate and settle down.
When one last hoorah goes awry, he’s forced to leave the sea to rescue his twin. Soon he’s swept off his feet by a handsome alpha. However, actions have consequences that will cost Erik dearly.
Can a wolf and a siren ever have their happily ever after or will the king lock him away for his own protection?
The Siren's Song is the fourth book in Legends of the Packs, a collection of your favorite fairy tales retold in the modern world with shifters, alphas, omegas, and male pregnancy. The books can be read out of order, but for maximum enjoyment it is recommended to start with book one – Ginger Fella.
Angel's Review:
Kaydee Robins does it again!! Another fantastic book with excellent characters and storytelling.
Erik is a siren who's spent all of his life under the water along side his twin Dare. They usually end up causing mischief and getting into trouble with their father. When they get caught getting into trouble again their dad is at his limit. He gives them an ultimatum; either they find their mates or they are banished from the kingdom.
Jax is an Alpha who's currently being a stand in for Brody. While Brody is away two sirens get caught in a fishing trap. Since the one siren was injured they were brought into the castle, when Jax sees Erik he knows he has to have him. But should he?
I loved this book and I know I say that about all of Kaydee's books that I've read but it's just so true!! She is an amazing writer and knows how to create beautiful characters you can't help but fall in love with. There are also so,e character that you want to shake a bit, not going to lie. But that causes depth, right? You aren't going to like every character and you certainly won't like several of the characters in this book. But the characters that are really great will more than make up for the 'evil' characters.
The characters are so well written and has so much depth and backstory I'm in awe every time I read a new book that's apart of this series, I've been hooked every since I read the first book in this series and I'm still hooked. I'm so excited to see what's going to come next in this amazing series. I really hope we will get to see Dare find their mate. I would love to read a story about them, especially because then it would be another book about a siren!! Which I love reading about them along with mermen.
My only critique is yet again I feel as though we aren't seeing enough of the main characters as a couple. They get together, some big scene happens and then it's all wrapped up. Now don't get me wrong I still enjoy these books, it's just for me personally I would really like to see more of their relationship.
I highly, highly recommend The Siren's Song to anyone who loves fairy tales. Don't be expecting the classic telling of them though, Kaydee puts her own twist on the classics. While this can be read as a standalone I recommend reading the previous books in this series first. It will make it a better reading experience overall.
Rating: 4 Stars
The Siren's Song is currently available in e-book and paperback and can be read as part of your Kindle Unlimited Subscription
4 Stars Angel ARC Fairy Tale KU MPreg Paranormal Series siren Wolf