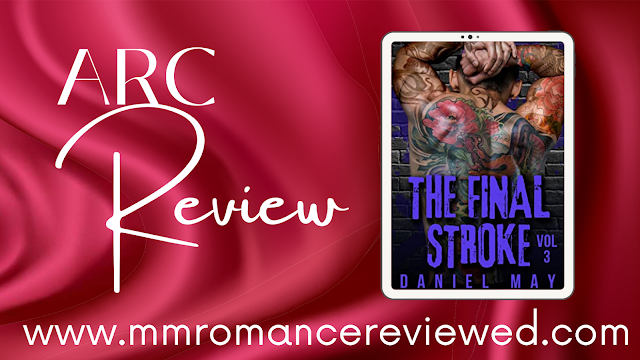 Daniel May gave us a gift for his birthday this year... the final installment in the revised Taste of Ink series, The Final Stroke, featuring extended scenes and the HEA we've been promised since book 1...
From the blurb: 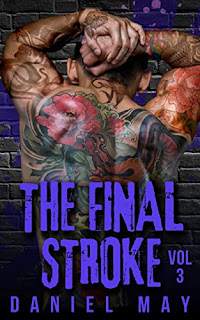 “I’ve decided this is how I want to die — getting cucked by the man whose fiancé I’ve been fucking for months.”

With boyfriend and side piece suddenly under one roof, Trinket is living his worst nightmare and best fantasy all at once.
What should have been a disaster, introducing longtime boyfriend Zee to Mini (the man he’s been cheating with), has borne strange fruit. His ability to play the game has finally hit a wall. It isn’t just guilt, and it isn’t just the impracticality of cheating on Zee right under his nose.
It’s the fact that Zee and Mini actually seem to like each other.
With Mini’s resources yanked out from under him, forcing him to fall on the couple for a place to stay, he bounces back and forth between playful and downright rude. He resents Zee’s charity, but is fascinated by the man he’s spent so long cucking, and can’t resist antagonizing him.
Zee is remarkably tolerant of Mini’s abrasive ways. The two turn out to have more in common than the man they’re both sleeping with; they talk art, kink, and baggage. As Mini settles in as houseguest, he gets cozy with more than Zee’s credit card.
The more the strange, almost domestic peace stabilizes, the more anxious Trinket becomes.
What will happen when the truth finally comes out?
The Final Stroke is the third and final book in a high heat, slow burn MMM trilogy with a happy ending. The books follow the same story and cannot be read as standalones.
This trilogy was originally published as a series of seven books: A Taste of Ink, Lost in the Linework, A Guilty Canvas, A Stanza on Skin, A Darker Palette, The Color of Need, and A Final Stroke. The Final Stroke contains content from the sixth and seventh books. The series has been lightly revised, with a few small changes and an extended ending in the third book.

This book was worth the pain and agony that was the first two parts... just as steamy, just as gritty, but with healing, communication and a chance to see if Trinket can have it all... two men to love...

The Final Stroke was exactly what I hoped for - the road to building a MMM relationship that works for Trinket, Zee and Mini...

If you've read parts one and two, you'll love where this book takes everyone.

The Final Stroke, as with the rest of the series,  is currently available in e-book and paperback and can be read as part of your Kindle Unlimited Subscription