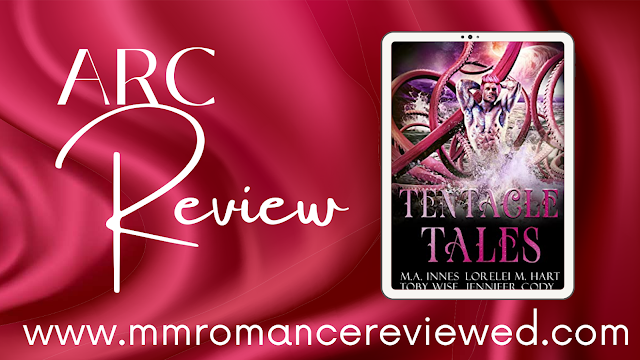 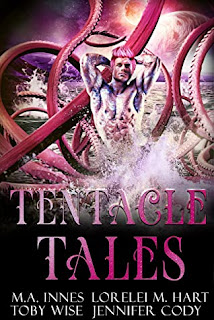 From the blurb:
Four best-selling authors.
Four binge-worthy tales.
Tentacles galore.
Brought to you by M.A. Innes, Jennifer Cody, Lorelei M. Hart, and Toby Wise, Tentacle Tales is a sweet with heat, some of which is knotty, collection of MM romances featuring smexy alphas, the kraken we’ve all been waiting for, fierce omegas, an alien who will make you pant, true love, enough appendages to keep you up way past your bedtime, and even some mpreg. These novellas are available all together for a limited time so be sure to download your copy today.
Jacquie's Review:
It starts off toe curlingly hot and steamy with aliens and the adult entertainment industry. The attraction moves quickly but I loved that, it fit the story well. The whole story just left me with a smile on my face and I'd happily read a longer version of these two together. Although short, there was plenty of world-building involved.
The second story is a sweeter slower burn but just lovely in a small town setting. The characters were easy to like and had a pretty well rounded out backstory. I liked the little sub-plot with saving the house and each of the characters finding their place in the town.
The third has cameo appearances from characters from the authors Sucker For You book (which I loved) and it was adorable. I really liked both mcs and their connection. It slotted into the larger world that the author has created seamlessly.
The final story was a little more wacky in the way that I've come to expect from this author. A whole lot of fun and something I'd like to see more off. There were a few interesting characters that I would love to see again. I want more adventures with Soren and Cam.
All in all, Tentacle Tales is a fun read with a bit of something for everyone. It does contain mpreg and egg laying so if that isn't your bag, skip stories 2 and 3.
Rating: 4.5 Stars
Nicole's Review:
I want to preface this review that MPreg is really not my thing. Despite that, I loved this collection of Tentacle love!
Your Mate by MA Innes:
This story is set in the New Neighbors world, which I have not read previously. I definitely will now, as this story was fascinating. Evan and Aristotle have instant chemistry. I won't lie and say I wasn't a little shocked that we jumped right into the book with an interview for a Porn star role, but the way it played out was adorable and HOT AS HE-Double hockey sticks!!! I am so excited to read some of the other stories from this world, and am looking forward to getting a better understanding of the aliens and how they interact long term with the humans.
Squid Pro Quo by Lorelei M. Hart:
This story is set in an Alpha/Omega world, which as stated is not my normal cup of tea. Beyond that, Wade and Hurley were so sweet it was hard to not love them. I feel like there was a lot packed into this story that was missing due to the compacted timeline. I think this may have been slightly better as a full length story, I wanted to know more about how the couple won over the town!
Tentacles and Tea by Toby Wise:
This again is my first glimpse of characters set in a previously built world. Jonas and York are both equally sweet and romantics at heart. The pace of this story is different from the others, as both MCs are supernatural. *Spoiler* I will say the birth experience is completely unfair.
Kraken's Mate by Jennifer Cody:
I'm not going to lie to you, Jennifer Cody can do no wrong in my opinion. Everything she writes is on my auto-buy list, and was the main reason I was interested in this book. Though not stated outright, this book is set in her DU series, but is no issue as read alone. That being said I am obviously bias, but this was my favorite of the 4 stories. Soren was so adorably innocent I was instantly in love. Cam was just the Kraken I was hoping for, and I love that his biped form was so different from his MerKraken. The slime was just the silliness I've come to expect from JC, and I hope to see a lot more of this couple in the future!!!
Rating: 5 Stars
Laora's Review:
This is a multi author tentacles read.
I got stuck in the first story for a bit. That was the one that was my least favorite one in this bundle since Aliens are not really my thing.
I really enjoyed the two octopus ones, those yo where set in the same place and world but both authors had different 'means' in regards to the impregnation and birth part for the Mpreg part and also in relation to the shifters relation to the ocean.
And lastly the Kraken one was just a hoot,  I bet the author had a lot of fun of making a demi-god 'fit' into todays world view.
All and all a good tentacle read that gave me as a reader an overview what is out there in tentacle writing. It made me oh and ah and lol.
Rating: 4 Stars
Tentacle Tales is currently available as an e-book and can be read as part of your Kindle Unlimited Subscription
4 Stars 4.5 stars 5 Stars Anthology ARC Fated Mates InstaLove Jacquie KU Laora MPreg multi-author Nicole Paranormal steamy sweet Tentacles