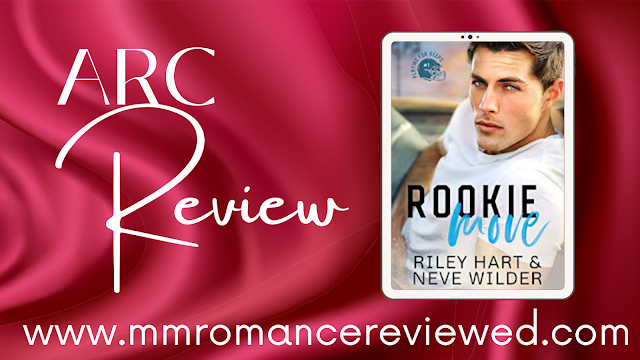 Jacqueleen the Reading Queen and Janet both reviewed Rookie Move for us. Jacqueleen left the notes saying, "I was so excited when I heard about a collab by Riley Hart and Neve Wilder. Rookie Move didn't leave me disappointed one bit!"
From the blurb:
Falling for a teammate who also happens to be your brother's best friend? Total rookie move. 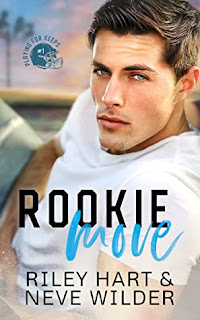 McRAE: I’ve had a crush on my brother’s best friend since the moment I laid eyes on him four years ago.
Warner Ramsey is 225 pounds of pure hotness, a media darling, and one of the best NFL quarterbacks in the league.
Hell, he’s the reason I figured out I’m solidly bi.
It was easy to keep my crush under control when I was in college. Now, we play for the same team, and every time he talks smack, I want to shut him up. With my mouth.
But I’ve got other things I should be focusing on, like dominating my rookie year with the Denver Rush and finally stepping out of my brother’s shadow.
Besides, Ramsey’s straight.
RAMSEY: I’ve never tapped into my bisexuality—never told anyone except my best friend that I’m bi. All I want is to play football and not draw media attention like my dad, who got ousted from the league.
Garrett McRae is my biggest temptation. He’s gotten under my skin for years.
I’m supposed to be looking out for him, not thinking about getting him naked.
And definitely not the kiss we shared.
That I somehow instigated.
It was stupid, and not like me, but God, it was hot.
We’re teammates, with million-dollar contracts on the line. And yet…is a little experimentation really so bad?
Rookie Move is a low-angst, high-heat sports romance in the Playing for Keeps series.
Janet's Review:
Loved, loved, loved!! This story hooked me, left me smiling for days!  Ramsey and Garrett have sizzling chemistry!!
Rookie Move was a sweet, hot and steamy romance featuring brother’s best friend and a teammate. Ramsey is closeted and Garrett is out and proud. He’s also a cocky as AF! Garrett’s sass and snark made several laugh out loud moments. Ramsey and Garrett’s banter and interactions with each other were so much fun to read.
The cast of secondary characters were fantastic! Loved Houston, I’m hoping he next!
Overall, a fantastic read, well written with pacing that flowed.
Rating: 5 Stars
Jacqueleen the Reading Queen's Review:
This was super cute and super hot. I thought with Ramsey being closeted there would be a lot more angst but I was wrong.
Rookie Move was definitely more on the lighthearted side of things which I really enjoyed. I adored Garrett. He was such a cocky little shit, but not in an annoying way. He worked hard and earned the right to be cocky about his talent.
The romance was funny in that neither of these idiots realized they were basically in a monogamous relationship. Friends with bennies my ass haha. They craved each other and not just in bed.
It was actually really sweet seeing them all of a sudden clue in. And shout out to Houston, Garretts brother and Ramseys bff, for being a stand up guy. I'm hoping he gets his own HEA at some point in this series. Tucker too, but with him I get the vibes his book may lie the way of enemies to lovers with a certain rival team and if so I am so there for it!!
Rating: 5 Stars
Rookie Move is currently available in e-book and paperback and can be read as part of your Kindle Unlimited Subscription
5 Stars ARC Contemporary high heat Jacqueleen Janet KU low angst sports