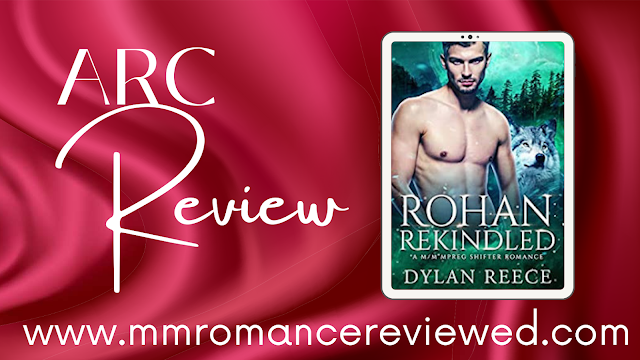 "I can’t imagine what it’s like for you and Mars, bonded fated mates, being apart from each other. But I bet you’re in agony, and it won’t let up anytime soon.” Rohan Rekindled.
From the blurb:
Five years ago, wolf shifter Dr. Rohan Holt saved his fated mate from scandal by disappearing. Haunted by grief and guilt, he believes he’ll never see his human student, Mars McCauley, again… Until Mars stumbles into small town Darlington with a career-ending injury. 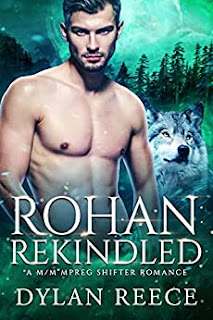 Caring for the pro athlete is Rohan’s purpose, and there’s only one way to rescue the omega—triggering an unrelenting heat, giving him a bloody claiming bite, and turning him into a wolf shifter. But bonding with Mars and losing him again is an agony the doctor can’t survive.
Mars is just as desperate for a future with Rohan, the man he’s been searching for since college. The only alpha he’s ever wanted to mate with. But Mars has a championship to win and his public persona has no room for a handsome older husband. And raising a litter of pups is out of the question until he finishes the season.
Spicy phone calls and weekend visits make their secret long-distance relationship bearable until a stalker threatens to expose their age-gap romance. Hiding is too much like their college days, and Mars is torn between safety and happiness. Is their bond truly unbreakable? Or will scandal destroy their relationship again?
Rohan Rekindled is the third book in the Darlington Pack series. It can be read as a standalone novel, but it expands on storylines and characters introduced in earlier books. The first portion of Rohan Rekindled runs parallel to Book 2: Atlas’s Accident, but it is an independent story.
This book features an age-gap second chance romance, long-distance yearning, first shift cuteness, locker room hijinks, close-knit pack dynamics, more pups than Darlington has ever seen. And a guaranteed happily ever after.
Laora's Review:
Rohan Rekindled runs partly parallel to Atlas's Accident, the previous book, but this book tells the story about Rohan and Mars how and when they first met and how they now reconnected and have to make decisions if they choose to be together and where. And if Mars should prolong his sporting career. They choose to be together in Darlington, after they can't stand to be apart and start a family before Mars plays his final game(s), after giving birth to adorable pups/ babies.
The over arcing storyline about the feud with the bears reappears from Rohan and Mara their perspective.
A new storyline about a 'stalkerish' person, Quentin, from Rohan and Mars their past reappears and threatens the safety of Darlington and its inhabitants once more or does he?
I am also looking forward if said Quentin is indeed Leo his fated as it seems to be and if the two black wolfs are friends or foe?
I totally got lost in the wonderful world Dylan has spun and recommend you read the earlier books in the series first to get a full understanding of characters mentioned.
Rating: 4.5 Stars
Rohan Rekindled is currently available as an e-book and can be read as part of your Kindle Unlimited Subscription
4.5 stars Age Gap ARC KU Laora MPreg Paranormal Series Shifters Standalone