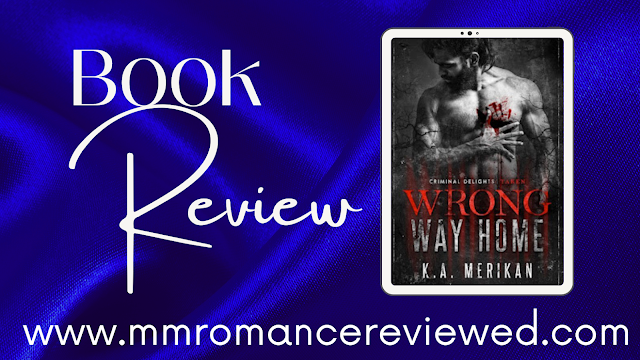 Wrong Way Home is a new take on horror with a survivalist/prepper gay man and a hostage. What could possibly go wrong?
From the blurb:
Criminal Delights
--- One wrong turn. One right man. --- 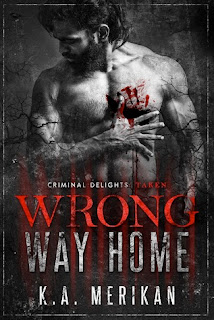 Colin. Rule-follower. Future doctor. Witness to murder. Captive.
Taron. Survivalist. Mute. Murderer. Captor.
Like every other weekend, Colin is on his way home from university, but he’s taunted by the notion that he never takes risks in life and always follows the beaten path. On impulse, he decides to take a different route. Just this one time. What he doesn’t realize is that it’s the last time he has a choice.
He ends up taking a detour into the darkest pit of horror, abducted by a silent, imposing man with a blood-stained axe. But what seems like his worst nightmare might just prove to be a path to the kind of freedom Colin never knew existed.
Taron has lived alone for years. His land, his rules. He’d given up on company long ago. After all, attachment is a liability. He deals with his problems on his own, but the night he needs to dispose of an enemy, he ends up with a witness to his crime.
The last thing Taron needs is a nuisance of a captive. Colin doesn’t deserve death for setting foot on Taron’s land, but keeping him isn’t optimal either. It’s only when he finds out the city boy is gay that an altogether different option arises. One that isn’t right, yet tempts him every time Colin’s pretty eyes glare at him from the cage.
“When Taron looped the heavy metal collar around the slender neck and closed the padlock, his body throbbed with the excitement of knowing he owned this boy.
Was it wrong? Yes, yes it was.
Was it so, so good? Definitely.”
POSSIBLE SPOILERS:
Themes: prepping, alternative lifestyles, disability, crime, loneliness, enemies to lovers, forced proximity, fish out of water, opposites attract, abduction, Stockholm syndrome, family issues
Genre: Dark, thriller M/M romance
Erotic content: Scorching hot, emotional, explicit scenes
Length: ~ 70,000 words (Standalone)
Wrong Way Home is part of CRIMINAL DELIGHTS. Each novel can be read as a standalone and will contain a dark M/M romance.
Warning: These books are for adult readers who enjoy stories where lines between right and wrong get blurry. High heat, twisted and tantalizing, these are not for the fainthearted.
This story contains scenes of explicit violence, offensive language, morally ambiguous characters.
Autumn's Review:
I loved this book. Well written. Prepper+gay+hostage all mixed into one story.
I wasn't sure how well the theme would have been in this book, but turns out it was perfect combo.  I wish I had came across this book sooner.
This book is the first of a 12 book series (all which can be read as a standalone). Each book features a different author and a different world. Each book has a crimanal of some sort.
Wrong Way Home isn't for the readers who don't like dark. This has gore and not for the skittish readers.
Rating: 5 Stars
Wrong Way Home is currently available in e-book, audiobook and paperback and can be read as part of your Kindle Unlimited Subscription