Laora says that His Guardian Angel is filled with, "attraction, suspense to love." 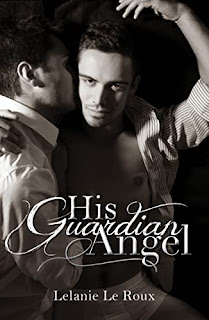 From the blurb:
Nicholas Callaghan, the owner of The Attic, deals in rare antiquities. After his most recent purchase, he finds himself in a bit of a pickle when he is bombarded with letters from an unknown person. At his
sister’s prompting, Nick enlists the help of Mason Archer, the owner of Archer’s Angels, who runs a specialized protection service. However, from the get-go, Nick and Mason butt heads as Nick’s feisty temper gets the better of him.
At first, Mason isn’t keen on helping Nick, using a personal problem as an excuse, but Nick immediately offers a solution, and Mason has no way of saying no. The attraction between them is too strong and soon what should have been just a regular case turns into a lot more fun than either of them bargained for.
Laora's Review:
This is a new to me author.
His Guardian Angel gave me enough suspense and more than a dash of a relationship that evolves. However the story felt a bit incoherent , for me especially at the beginning and end. I felt I missed some information, but that might be due to the fact that this is a novella and the author had to make choices.
I however got into the story and had to grin when Mason fed his 'nemesis'.
Rating 3.5-4 Stars
Janet's Review:
This was written by a new to me author.

His Guardian Angel was really good. Nick has taken over his parent shop along with his sister. He starts receiving threatening letters. Mason has recently set up a business to help is these situations.

Holy Moly, Nick and Mason have serious chemistry. The story was well written and the pacing was nice, although I think it could have used a beta reader to help with a few things.

Rating: 4 Stars
Lesetiger's Review:
Lelanie Le Roux is a new author for me. The story was quite good to read in between.
Art dealer Nick receives several threatening letters that he ignores at first. His sister recommends Mason to help him solve the matter. In the process, the two become closer.
The story is well written and easy to read. The chemistry between Nick and Mason is good, but the characters are described with little depth, which is probably due to the brevity of the book.
The story also offered some suspense, which was entertaining to read.
However, I found the events at the beginning and end a bit disjointed. A few more words here would have been good.
Overall 3.5 stars
Tatted_book_freak's Review:
An interesting story from a new-to-me author that definitely grasped my attention. The story itself was fast paced and absolutely no angst, which was nice.
Nick and Mason knew exactly what they wanted from one another and wasn’t afraid to go after it. An undeniable connection that turned into an even hotter amount of chemistry!
Rating: 4 Stars
3.5 stars 3.75 Stars 4 Stars ARC bodyguard Contemporary Janet Laora Lesetiger novella suspense tatted_book_freak wide