Review: Beau and the Bear (Legends of the Packs #3) by Kaydee Robins 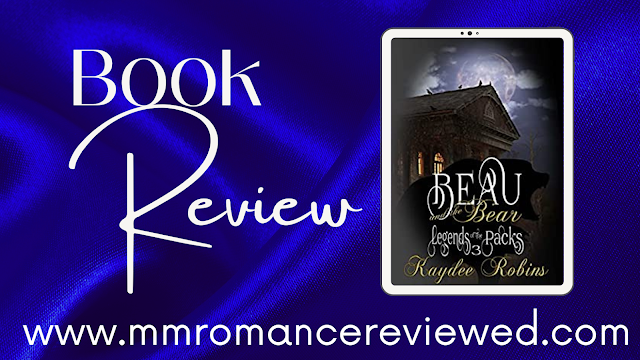 Beau and the Bear is a unique retelling of the classic Beauty and the Beast. Don't expect the regular story though! Kaydee takes inspiration from the original story but adds their own twists.
From the blurb: 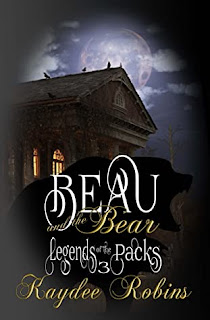 Finally free of his horrible mother, Caleb can settle down and find a nice man, right? Okay, maybe after they rescue his new brother-in-law’s brother.
He should have known it wouldn’t be that easy.
After an unnatural wind leaves him lost and alone in a foreign forest, he prepares himself for the worst. But nothing could have prepared him for the brooding biker who saves him.
Can Caleb find his way into the man's heart before it's too late, or will this Beau be locked away yet again?
Beau and the Bear is the third book in Legends of the Packs, a collection of your favorite fairy tales retold in the modern world with shifters, mpregs, babies, and more. The books can be read out of order, but for maximum enjoyment it is recommended to start with book one, Ginger Fella, followed by book two, Caspian Untangled.
Angel's Review:
Beau and the Bear is a twist of Beauty and the Beast. Caleb is in a predicament. After getting swept away in a magical whirlwind and landing in America with no identification, passports, or clothes, he's immensely vulnerable. When violent shifters attempted to kill him he meets Grizz. Also known as the Bear in this story. Grizz is the alpha of his pack along with also being the leader of their MC club. He's grumpy, has frequent mood swings, and needs to be lectured by Pyro for advice. He's also been known to be sweet and kind every now and then. When Caleb comes onto their property he doesn't know what to do, he knows that the omega smell good, he knows his bear wants the omega, but what he doesn't know if this omega is another spy his brother sent.
I thought this book was really good, I've absolutely loved all of the books in this series so far and I'm so excited to see what else Kaydee comes up with. I, myself am a massive fan of disney movies along with the stories those movies are inspired by. So having books that are a retelling of those classics with a twist is the best combination to me. I've read every book in this series so far and I haven't been disappointed. I just can't believe it took me this long to find this amazingly talented author.  I do have one critique though, I wish we got to see more of Caleb and Grizz together. I wanted to see more of their relationship develop and how they figure out being together. I also think it would've been cool to know more about what was going on with his brother. ( The people who read this will know what I'm talking about, hopefully.)
Overall though I think this was fantastic! Now I'm trying to patiently wait for the next book in the series.
Suffice to say I would highly recommend Beau and the Bear!!!
Rating: 5 Stars
Beau and the Bear is currently available in e-book and paperback and can be read as part of your Kindle Unlimited Subscription
5 Stars Angel Fairy Tale KU MPreg Paranormal Series Shifters