Playing for Keeps by Beth Bolden 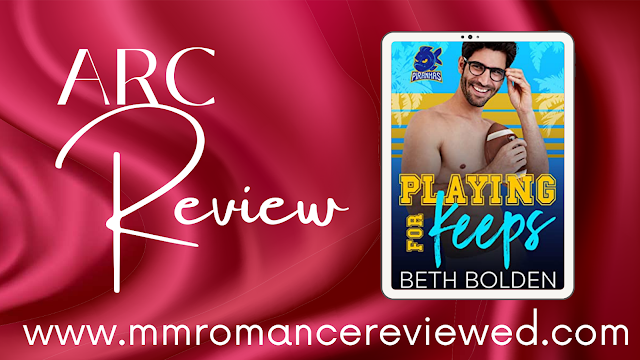 Beth Bolden has returned to Football Romance with another smash hit, Playing for Keeps
From the blurb: 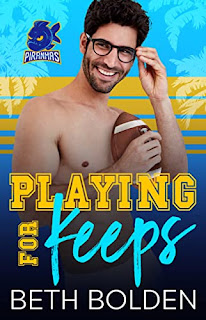 Sebastian Howard is the best damn cornerback in the NFL.
Or at least he was.
Age and injuries have taken a toll, and while most people have written him off, Sebastian isn’t ready to acknowledge that at only thirty-two, he’s already in the twilight of his career.
He signs with the Miami Piranhas intending to prove everyone wrong.
Only to realize that the head coach’s son, out-and-proud Beau Dawson, doesn’t believe he can.
Beau is infuriating but brilliant, and when he offers to help him on the field, Sebastian wants to say yes, but there’s one thing stopping him: the unexpected, inconvenient, and all-consuming crush he doesn’t want to have on Beau.
But Beau isn’t interested in playing it safe, with football or with anything else, and soon they’re embroiled in a hot—and secret—affair that would finish Sebastian’s career if Coach Dawson found out.
As Sebastian falls harder for Beau, he begins to realize that actually the worst thing in the world isn’t getting benched, but losing the man he loves.
Heather's Review:
In the football universe, not too many guys are out and proud, although the Miami Piranhas is the place to do it... a queer friendly team where even the Coach's son and assistant coach is a proud gay man.
Sebastian has so many battles to face in this book - from being an 'older' football player, to potentially having to completely shift gears - from corner to safety - all while battling with Beau - and being attracted to him...
From the first time they butt heads to the all their firsts - there's chemistry, fireworks and so much steam... and the complications of being who they are to the team and each other is an interesting play for tension...
Playing for Keeps kept my attention from start to finish and I'm so excited for the rest of the Miami Piranhas to get their HEA's!
Rating: 5 Stars
Red's Book Reads:

I absolutely adored this book! Sebastian is trying to prove that he still has what it takes to succeed as a player and is determined that he can do it. When Beau try’s to get him to switch positions, Sebastian is not happy.
I loved how the relationship between these two developed and went from two people trying not to show their interest to a couple. I thought the way that the various issues in their relationship were dealt with were really good and loved that there wasn’t too much drama.
This was just a feel-good sports romance and I enjoyed every minute of it!
Rating: 5 Stars
Angel's Review:
"Sebastian has been a corner for the NFL for quite some time, it's his dream position. So when he gets traded to the Piranhas and gets told they want him playing a different position, he's angry. He's good at being a corner, so why does he have to change? What makes matters worse for Sebastian is that the person delivering the news is Beau. His coach's son. Beau irritates him and gets on his nerves, but that doesn't stop Sebastian from wanting him. Even when he probably shouldn't.
Beau is technically his dad's assistant, he doesn't have a coach's official position but he spends all of his time watching play and trying to help the coaches come up with the best plays. Sebastian is stubborn, if only he would be open to change he could see the great opportunity he has. Instead of Sebastian trying the new position out with a positive outlook, he's all negative about it. Why put his all into someplace he feels he doesn't belong?
Beau should not want the increasingly stubborn and frustrating man but he does.
These two characters chemistry is off the charts! They have a push pull relationship. This book is definitely not about a couple who just complies with the other. Oh no. This book is about two main characters who are both passionate about their jobs and who desperately want one another. They push each other in the best ways, they talk things through, and most importantly they listen to each other. This story was really great, great character development, wonderful storyline and awesome setups for future books!
I loved being able to get to read that extra bonus scene. I can't wait to see if that certain character will get his own book as well.
Now you can technically read this without reading the prequel that was available for free through Prolific Works, however, I strongly recommend reading that first then jumping into this. It adds more backstory that way.
I also have to admit that I'm not that big of a fan of sports, I don't keep up with sporty games that go on. But! I did enjoy learning some new things about football that I didn't know before. Maybe now when my Dad and brother are watching football I might know what they're talking about.
Overall really good, I'm looking forward to seeing what comes next and who comes next.  I would've loved to see more of Sebastian coaching Rose but that's just a tiny little thing.
I definitely recommend this book to those who are into sports and definitely to those who aren't. You'll still enjoy this, trust me!
Here's my favorite line in this whole book, it made me feel all sorts of things; ""If you're good with you, then what you tell  the rest of the world doesn't matter.""
Rating: 4 Stars
Playing for Keeps is currently available in e-book and paperback and can be read as part of your Kindle Unlimited Subscription
4 Stars 5 Stars Angel football forbidden relationship Heather KU Opposites Attract Reds Book Reads secret hookup sports