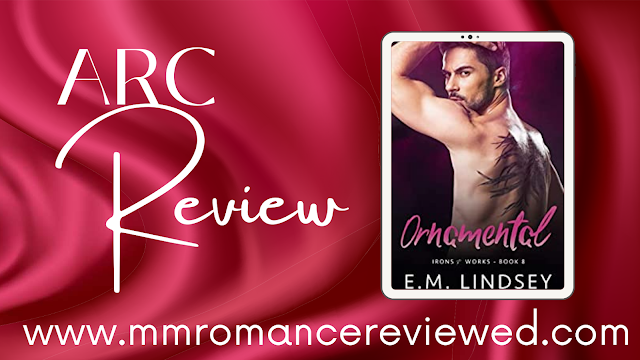 Janet was a big fan of Ornamental calling it, "Freakin Phenomenal! I wish I could give this more that 5 stars."
From the blurb:
It wasn’t that Luke was unhappy at Irons and Works. After all, that was his home, his family, his safety. 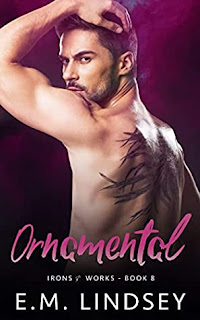 But watching everyone around him fall in love was a bit much when every single relationship he’d tried to maintain fell to pieces. Was he just unlucky, or was there something about him that was just fundamentally unlovable?
What Luke doesn’t expect in answer is an older man with greying hair and eyes that look like they’ve seen into the core of the earth.
What he doesn’t expect is for Tony to introduce everyone to his half-brother.
And what he most definitely doesn’t expect is for that man to zero in on Luke, and decide—whether Luke likes it or not—that he’s the only thing in the shop he actually wants.
Ornamental is the eighth book in the Irons and Works series which are best read in order. It contains no cheating and a happily ever after.
Janet's Review:
Freakin phenomenal!
I feel like I’ve come home whenever I read an Irons and Works stories, it’s amazing and emotional for me.
Luke has come back home to Fairfield after several years working in another state. Raf has moved to Fairfield after his wife divorced him and took his daughter 3000 miles away from their home state.
I absolutely loved this Irons and Works series. I always think that the author cannot top their previous works and boy am I ever wrong!
Raf and Luke were absolutely perfect for each other! Luke accepted Raf for who he was. This story hooked me, the pacing flowed and before I knew it, I was done with the story.
I loved how we get an update with all the previous characters from the Irons and Works series. Overall Phenomenal!!!
Rating: 5 Stars
Heather's Review:
E.M. Lindsey has a unique talent for writing flawed characters that you absolutely love and just want to hug, love and make sure they get their HEA... and in this installment of Irons & Works, we meet Luke and Raf, both of whom have overcome incredible odds to be where they are and both struggle with the idea that they deserve happiness... making you just want to love them all the more...
I couldn't stop reading Ornamental, I actually fell asleep with my kindle in hand because I kept wanting to read one more chapter as we chased the elusive HEA...
Ornamental is a story of awakening, acceptance and overcoming fears to get what and who you want... and while you should go back and read the series in order, you can definitely pick up Ornamental and read it standalone.
Rating: 5 Stars
Angel's Review:
Another great addition to the Irons and Works universe. "Ornamental is the eighth book in the Irons and Works series. It's recommended to read the books in order, but you can read this as a standalone. I've previously read the other 6 in this wonderfully diverse series but I unfortunately haven't been able to read book 7 yet. And even though I haven't read book 7 I still really enjoyed book 8!
Ornamental is about Luke and Raf. Luke is a tattoo artist who used to work at Irons and Works, then he went to work elsewhere and decided he wanted to come back to the one place he could ever call home. Since his return he's grown closer than ever with his brothers in the shop and he may have just found a person he wants to be in a relationship with. The first person he would ever be in a relationship with.
Raf is struggling. His now ex wife not only divorced him after his tics came back but she also took off with their daughter.
He has to start his whole life over, he moves to Fairfield, has to find a place to live and a new job. Now he has to deal with growing feelings for the young man who works for his brother.
My thoughts and opinions:
I really enjoyed this book, just like every other book I've read by EM. I haven't read a book yet I haven't liked by them. Their characters are always so diverse and not the 'normal' characters we as readers are so used to reading about.
The characters are unique and have their own set of flaws, struggles and their own talents and personalities. I personally loved watching these two men come together. To overcome the struggles both of them have dealt with their whole lives. I also  loved how supportive everyone was of Raf, but especially how Luke was with him. You can feel how much he cares about Raf.
Want to know what my favorite part of this book was? My favorite part of this book was being able to see all of the characters from the previous books in this series.
The only reason I didn't give this 5 stars is because I wanted more of Raf and Luke together. I understand why EM wrote this the way they did but I wanted more. There was a lot of back and forth with them.
I'm not sure if this is the last book in the Irons and Works universe or not but I certainly hope it isn't. I love this world and I don't want to see it end just yet.
I not only recommend this book to you but I strongly recommend you to read this whole series. As soon as possible!!
Rating: 4.5 Stars
Ornamental is currently available as an e-book and can be read as part of your Kindle Unlimited Subscription
4.5 stars 5 Stars Age Gap Angel ARC bi awakening Contemporary Emotional Heather Hurt/Comfort Janet KU self-discovery Series slow burn