mountains that move (Kings of Airlie #2) by Casey Cox 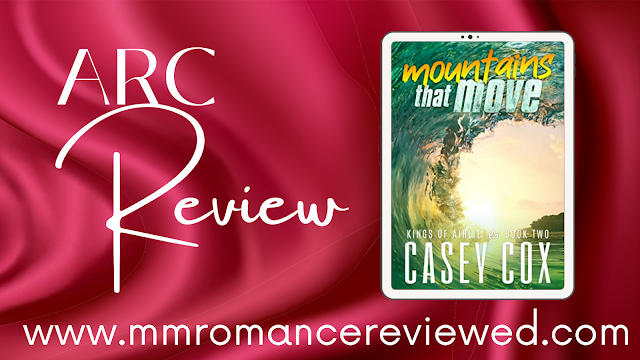 A stalker is threatening kitesurfing champion Troy and the best protection is Troy's ex-boyfriend Kaide. There are only so many times a man can be dumped by the love of his life, but Kaide will do anything to protect Troy, even risk heartbreak all over again and again. Find out what SNik and Sarah C had to think about this journey in Casey Cox's latest, mountains that move.
From the blurb:
This season, I've got a lot to defend... 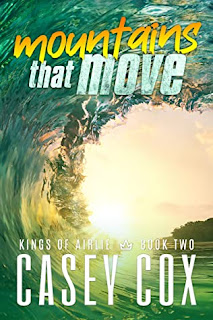 He's known as 'the angry one,' the middle brother with a chip the size of an asteroid on his shoulders. Trouble seems to follow Troy King wherever he goes. What no one realizes is that Troy's broody, angsty exterior masks a lifetime of pain, torment, and trauma––and a long-held secret that threatens to tear his already dysfunctional family even further apart.
The only place Troy feels in control is in the water, and this year, he's determined to win his third world championship title. But that dream gets disrupted by a series of anonymous, online death threats. What's even worse is that the person called in to protect him is the only man who brings him undone: Kaide Thompson.
Kaide's mission is simple––keep Troy safe. But Kaide and Troy share a seven-year history. One that takes complicated and messy to a whole other level. Their chemistry is electrifying; their attraction undeniable; their dynamic as magnetic and destructive as ever. But they've been down this road before… Twice… And it always ends the same way.
Despite Troy doing everything he can to push him away, Kaide isn't backing down this time. He's prepared to do whatever it takes to not only keep Troy safe, but also help him find a way to deal with his pain. Even if it means he'll have to walk away from the only man he's ever loved.
To achieve his dream, Troy needs to double down and focus on winning the championship. But with his life in danger, the season spinning out of control, his family more dysfunctional than ever, and a lifetime of secrets simmering just below the surface, will Kaide be there for him when the horrific truth finally comes out?
Kings of Airlie is an exhilarating, action-packed MM romance sports trilogy about love, brotherhood and resilience––with a powerful message that dreams don't die, they just sometimes change.
Each book in the series has a new love story with a happily ever after. With continuing family and competition plots, the books do need to be read in order.
SNik's Review:
Second in series (Kings of Airlie), best if read in order due to continuing backstory and characters.
Heed content warnings. Second chance. Hurt/comfort. Slow burn. Dual POV.
Troy is all about winning another kitesurfing championship but his old stalker has resurfaced and his family brings in the one man that has Troy’s heart solidly for years.
Kaide runs his own security firm and has never loved anyone like he loves Troy, even though they have tried to be together and failed more than once, Kaide can’t help but want to protect Troy and be near him again even if it means being left behind once again.
mountains that move was a second chance to root for, both Kaide and Troy still love each other deeply over many years and have to overcome the secrets that Troy has been keeping from Kaide.
Every interaction between Kaide and Troy is heartfelt, with a few flashbacks from their previous relationship, they are both likable and lovely together.
Big build up to the finale coming in book three, this series is a roller coaster ride for sure.
Rating: 4.5 Stars
Sarah C's Review:
Wow. mountains that move was a RIDE and I mean that in the very best of ways. Casey Cox has always done so well at light hearted and fluffy romances and I will admit that I was a bit concerned about the darker tone promised with the Kings of Airlie series. But book one drew me in and book two? Well book two captured me and refused to let me go. I couldn't put it down and then, I couldn't pick up another book for a day or two because I knew that I would be disappointed that it wasn't THIS book and there wasn't more of THIS story.

So let's just dive in.

This book is allegedly a sports romance. The King brothers are at the height of their wind surfing careers and Troy is one of the best. When he starts recieving death threats, his brother calls in for reinforcements - in the form of his ex-boyfriend, Kaide. Kaide and Troy have a long and convoluted history that spans years and that refuses to let go of either of them even though it never seems to work out.

Over the course of the book, we explore not only who the stalker is and how the stalker is taken down, but why Troy and Kaide never work out. It turns into an emotional ride, one that had me almost in tears at several instances. I figured out very quickly some of Troy's past issues, but watching him open up to Kaide about his history broke my heart in the very best way.

I have said many times that Casey Cox is amazing with characters, and this book proves it yet again.

mountains that move is a dual POV book. It is a part of the Kings of Airlie series and I don't think it'd be nearly as good as a standalone. The series has a lot of ongoing threads and in order to fully understand what's going on, you need to read book one. I also issue the warning that this book does end on a cliffhanger - not with the main couple but with one of those plot lines that go through the series from beginning to end. I wanted to scream with how the book ended and now I'm just impatiently awaiting for Casey Cox to give us the finale. There is some triggering content in the book, so please heed the trigger warnings.

But I highly recommend this book to anyone who wants a good and emotional read as well as anyone who is an existing Casey Cox fan. Honestly, I'd recommend it to anyone, because it is that good. Book hangover inducing, really.
Rating: 5 Stars
mountains that move is currently available in e-book and paperback and can be read as part of your Kindle Unlimited Subscription
4.5 stars 5 Stars angst ARC Contemporary KU Sarah C second chance Series SNik sports Trigger Warning