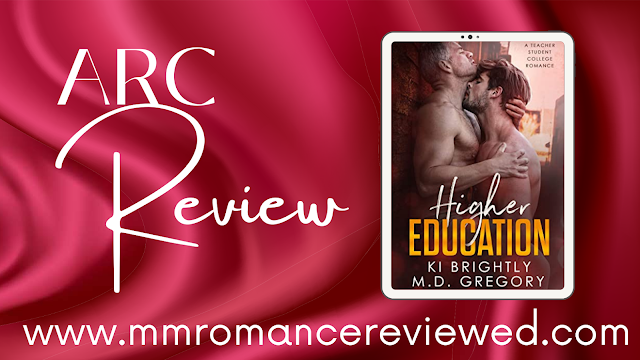 Higher Education starts off with a bang... literally - almost completely anonymous bathroom sex... and takes so many delicious twists and turns from there... 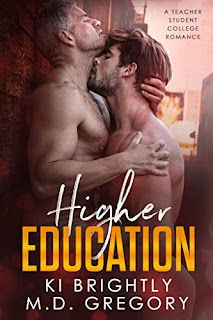 The Jock Law Student Who Has It All
Judge Daughtler was born into privilege, anything he wants he gets. During a night out at a club, Judge meets a mysterious stranger named Flynn and there is an immediate flash of interest from both men. Judge loses Flynn in the crowd when a fight breaks out and vows to find him again. Unfortunately Flynn is only too easy to track down because, as it turns out, he is a teacher at Judge’s law school. Undeterred, Judge pursues him.
The Teacher Searching for a Second Chance
Flynn Goddard has had a terrible few months—first his partner of twenty-five years left him for a much younger man, which put his life into a tailspin and destroyed his finances. Now Flynn is horrified that the first new man he is interested in is a law student. Worst of all, Judge doesn’t seem to understand why they could both get into trouble if they indulge in a relationship. Flynn must be a sensible adult and put his foot down; however, Judge is charming and determined.
Up In Flames
Flynn loses the battle and begins to date Judge. The relationship looks bad from the outside, but they want to be together. Flynn knows Judge better now—there is a big heart to go along with his cocky attitude. If Flynn and Judge keep their relationship under wraps everything should be fine, but life has a funny way of throwing wrenches into even the best plans. Will they be able to stay together through the challenges that come their way? Or will Judge crumble and run, the same way Flynn’s ex did?
Flynn and Judge have a hard time figuring out their lives, but by the end of this second-chance romance full of flirty fun, they get their happily ever after!
Heather's Review:
Higher Education hits so many of my hot buttons for a great book - younger dom/older sub, student/teacher, anonymous one night stand becomes more... I haven't read the previous books set in Ki Brightly & M.D. Gregory's New Gothenburg world, but this book easily stands on it own and steams up the world around it.
The one thing I wasn't expecting was the sweet that went with the steam - the genuine instant connection that Flynn fought against and the dogged determination Judge had to make Flynn trust him enough to stay.  I like that the touches of rebellion in the relationship were Flynn's way of trying to protect Judge from himself...
This book has the right amount of angst, a dash of stalker-like obsession, hot library sex, a douche-bag ex and a sweet HEA that will make you smile.
Rating: 5 Stars
Higher Education is currently available as an e-book and can be read as part of your Kindle Unlimited Subscription
5 Stars angst BDSM dom Heather Older Sub One Night Stand steamy student-teacher Younger Dom