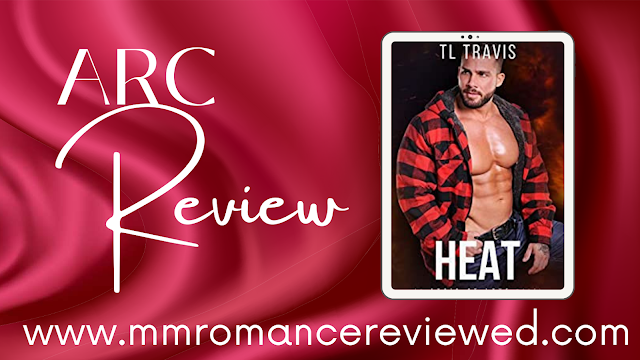 In a departure from rock stars and bright lights, TL Travis brings us to Alabaster Falls, a small town with all the small town vibes... and Heat slays (forgive the rock pun)
From the blurb: 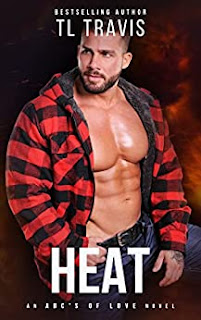 What do you get when you throw a burly blacksmith and the town’s poster child for clumsiness together?
A whole lot of swearing and a threatening use of duct tape.
And the need to construct a sign that reads, “DO NOT LET CAMPBELL NEAR THE FORGE!”
Alabaster Falls’ local blacksmith, Daughtry Blackburn, was satisfied with his reclusive status. He had iron to bend and orders to fill but he knew he needed something to take the business to the next level. His father had fought taking their business into the twenty-first century, but since he’d passed, it was up to Daughtry to keep things forward moving and he knew there was no way to do so without being on the World Wide Web. Metalworking, he got. Computers, not so much.
Campbell Jenkins was desperate to be accepted by his peers in the little town he’d called home since birth. Problem was, he was accident-prone. Not just in the sense of an occasional break here or there, but in a "can’t walk by glass without it shattering – even when it seemed he was a mile away" type of thing. No matter how hard he tried to fit in, this curse led to failure. Forced to stay stuck inside the walls of the home his grandmother left him, he spent his time learning all he could about computers and social media. His online friends never cast him aside—too bad the real world wasn’t as kind.
When he answers an ad in the local paper for online marketing assistance, he wasn’t sure what to expect. Least of all, the brawny man answering the door to a log cabin that had seen better days.
Can two opposites in forced proximity learn to play nicely or will one wind up in an iron grave?
Heather's Review:
I'll admit I had a bit of trouble getting into the first few chapters of Heat as TL Travis introduced us to Campbell and Daughtry, but once they actually met for the first time, I was hooked to see how the reclusive blacksmith and the clumsy computer genius would come together...
This book builds slowly, with both characters coming into their own and learning about themselves through interactions with each other... and it's fun watching them come together.  Once they're together, their heat rivals the forge!
Heat is sweet, funny, low angst goodness with just the right amount of heat and sass!  The rest of the ABC's of Love series looks to be MF reading, but Heat can easily be read standalone if you're like me and prefer MM Romance...
Rating: 4.5 Stars
Laora's Review:
This book is part of a multi author series which follows the letters of the alphabet.
I enjoyed this small town romance which takes a bit to heat up. I found Campbell such a strong character, persevering in a town which people ridicule him nor befriended him throughout his live. Now he wants to leave because a person can only take so much.
Que Daugherty who needs help with a website for his blacksmith business. They start of on the wrong foot, but realign.
This was a cute gay awakening for Daugherty. These guys work together as characters and pull each other to a higher level in their life. Just cute and endearing.
Rating: 4.5 Stars
Janet's Review:
Heat is part of the ABC’s of Love series. Campbell is lonely, his online community of friends are there for him to talk to. Daughtry needs to get his business rolling so he ends up hiring Campbell.
I adored Campbell and Daughtry!! I loved the build up in their relationship!! Seriously fun to watch them fall in love!!
Overall, a sweet read with two lonely guys finding each other. Well written with great pacing.
Rating: 5 Stars
Heat is currently available in e-book and paperback and can be read as part of your Kindle Unlimited Subscription
4.5 stars 5 Stars Contemporary Janet KU Laora low angst Opposites Attract Series size difference slow burn small town Standalone