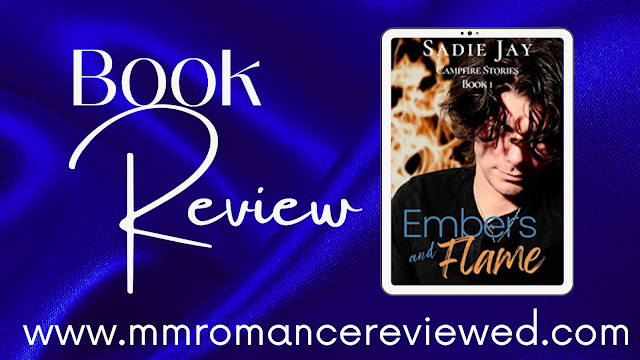 "I wasn't being selfish if I let myself be happy. I was allowed to be happy."
From the Embers and Flame blurb:
After an amicable breakup, Charles “Cherry” Andrews’ ex left him the couch, the bed, and the camping equipment. Replacing the noises of St. Louis with crickets and birdsong at his favorite campground 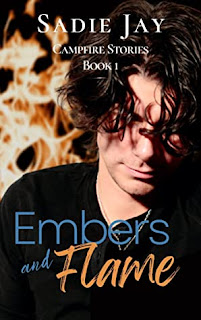 feels like the perfect vacation. He hoped to prove to himself that he’s fine on his own, but instead of finding inner-peace, he’s simply bored. His evening becomes instantly more interesting when a gorgeous guy with a loud motorcycle pulls into the neighboring campsite.
Ben Torres hopes that a cross-country motorcycle tour will help him find peace after his mother’s recent death, but a faulty tailpipe curtails his plans within hours of leaving home. Luckily for him, the cute redhead in the next camp spot happily shares his fishing equipment and offers taxi service during a week-long search for parts.
An unexpected kiss on their last day together becomes an afternoon of discovery that turns into a summer romance that could lead to a long distance relationship in the fall. Everything would be wonderful if they could spend the rest of their lives in a tent by a lake. But Cherry’s overly involved ex-boyfriend sticks his nose where it isn’t wanted and Ben’s teenage son has a hard time accepting his father’s bisexuality. Two-hundred miles may be the least of the challenges they face.
Miki.J's Review:
Great story!
Charles "Cherry" is camping alone after breakup with his ex, who was nice enough to leave all the camping gear (if nothing else !).  Ben is traveling in the area, visiting relatives and ends up at the campsite due to mechanical problems.
The chemistry between them is hawt - you can feel it off the pages !  It's just making the relationship work.....that's the hard part.  There is the distance between where they live.....and then there are the naysayers in family and friends of them both which causes doubts - so plenty of angst.
But Embers and Flame is also a very sweet and romantic story - you never know where or when you'll find love.  But when you, what will you do to keep it?
Rating: 5 Stars
Embers and Flame is currently available in e-book and paperback and can be read as part of your Kindle Unlimited Subscription
5 Stars angst ARC Contemporary KU Miki J romantic