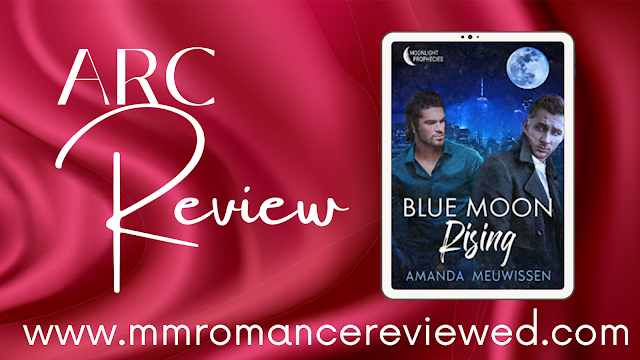 Kind hearted Alpha Jay needs to unite his pack and hopefully with the help of the charming seer and focus Bari he can finally accomplish his goal. However, there is an unseen person killing pack members and fostering internal pack tension, so Jay and Bari have to work quickly to solve the murders while trying to build a lasting relationship.
From the Blue Moon Rising blurb: 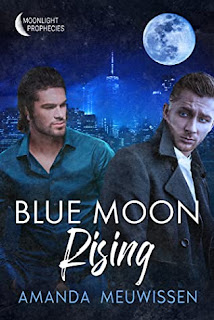 Alpha Jay Russell’s broken engagement may just be the best thing that ever happened to him. His ex-fiancé’s twin, Bari, is much more his type and straightforward about his flirting and desire to unite their packs.
Jay returns home after his misadventures in Centrus City to a new prophecy, an unknown enemy, and tribal unrest over a series of racially-driven murders. Furious, Jay is determined to bring whoever’s responsible to justice… but the unrest upsets the fragile peace he’s been working to achieve, threatens his new lover’s life, and undermines his position as Alpha, which makes investigating a challenge.
Can Jay and Bari work together to fight their inner demons—and a strange adversary dead set on returning to the past—or will mistrust and political machinations tear them apart?
Blue Moon Rising is the second book in the Moonlight Prophecies series. Fans of shifters, soothsayers, and shadowy villains will fall under Amanda Meuwissen’s spell in this suspenseful, sexy urban fantasy romance.
SNik's Review:
Blue Moon Rising is the second book in the Moonlight Prophecies series, best if read in order due to overarching storyline and continuing secondary characters. Paranormal urban fantasy.
Picking up immediately after book 1 (By the Red Moonlight), this book focuses on Alpha Jay as he returns home to Brookdale allied with the Centrus city pack but with a broken engagement to their Alpha.
However, Bari (the twin of Jay’s ex-fiance) is more than interested in Jay and travels back to Jay’s hometown to solidify their alliance and hopefully help Jay integrate the different tribes and packs within Brookdale to settle their internal and historical prejudices.
Jay is a cinnamon roll Alpha and Bari is his sweet and flirtatious match. I do wish we got more background and emotional time between the two, but I really enjoyed their interactions and all of the action and mystery/suspense of the story.
This series is entertaining and there are fun and intense relationships with secondary characters and the community that give a broader sense of the supernatural world building.
Rating: 4 Stars
Blue Moon Rising  is currently available in e-book and paperback.
4 Stars ABO ARC investigation Series shifter SNik suspense Urban fantasy