Bellamy (Sons of the Fallen #5) by Jaclyn Osborn 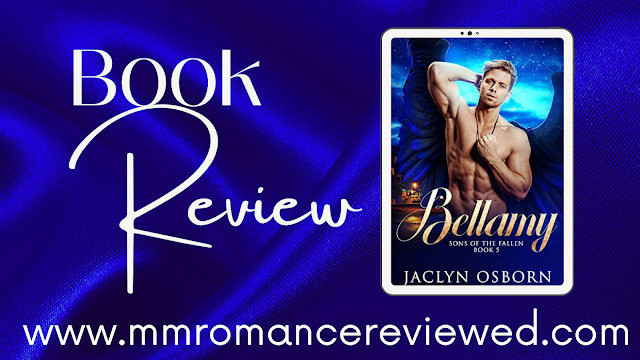 "To say that I couldn’t wait to get to the next chapter is an understatement because Bellamy’s book was just too thrilling. This series is by far the most pulsating work of fantasy and all it does is leaves you asking for more." Our reviewer, Zakiyya on Bellamy.
From the blurb:
What happens when your enemy is your fated mate? 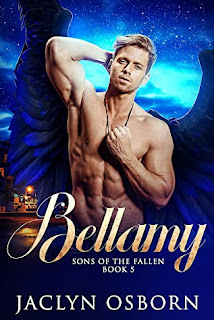 Anger. Denial. Bellamy’s felt both since the day he learned a demon was his soulmate. Mostly denial. Cursed with the deadly sin Lust, he’s used to no-strings-attached hookups. Love is a different story. He’s never wanted it. Romance is a waste of time when he’s dedicated his life to protecting the world.
A world his fated mate is trying to destroy.
Phoenix isn’t a hero. He’s self-serving, a bit wicked, and devious. He’s also the king of the underworld’s right-hand demon. So when a Nephilim he’s been waging war against turns out to be the one destiny chose for him, things get… complicated.
The understatement of the century.
As the war between angels and demons intensifies, circumstances force Bellamy and Phoenix together in an oh so close proximity. And the sizzling connection between them becomes an inferno of carnal desire. A beautiful disaster waiting to happen.
Or is it?
Bellamy is an urban fantasy MM romance featuring enemies to lovers, fated mates, wing slits and the fun things you can do with them, banter, warriors cursed with the seven deadly sins, and found family. Each book features a different main couple, but the series must be read in order. HEA guaranteed.
Zakiyya's Review:
Bellamy and Phoenix …😍😍
You wouldn’t think that these two outwardly confident and sexy characters would have the vulnerabilities they had.
Their story is emotionally charged all you want to do is hang on to every word.
I absolutely loved how their story played out – it was way more than anything I could have expected.
As for that little appetiser with Lazarus and Alastair – sweet baby Jesus – I had to put my face into a pillow cos I screamed with so much excitement for them…🥰🥰🥰🥰🥰
The war with Asa is intensifying and I’m going to be here for it every step of the way …💖💖
I cannot believe there’s only two books left now…😯
Rating: 5 Stars
Bellamy is currently available in e-book and paperback and can be read as part of your Kindle Unlimited Subscription
5 Stars Angels Enemies to Lovers Fated Mates HEA KU Urban fantasy Zakiyya