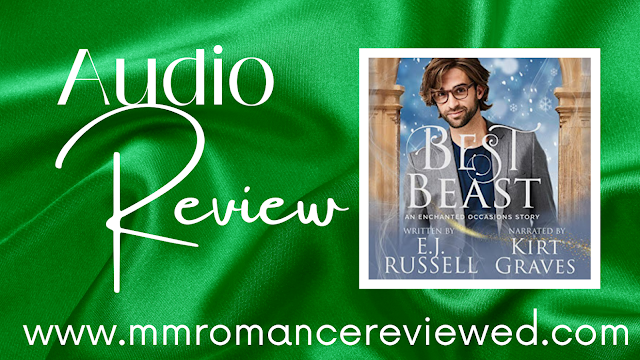 Best Beast is a varied story with many fantastic paranormal creatures. Masterfully narrated by Kirt Graves.
From the blurb:
Being invisible makes it really hard to get laid. 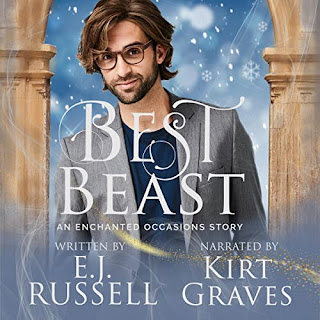 When half-human Kai Schiffer steps into the Interstices—the post-creation gaps between realms—his supernatural half kicks in, and he literally disappears unless…well, don’t ask.
But in a stroke (heh) of good fortune, Kai finally has a chance to show his face (and other parts, stars willing) to his long-time crush Jovan Kos—Interstitial Law Enforcement agent, wolf warrior, occasional berserker, and best man at their mutual best friends’ Imbolc wedding.
Jovan, who’s half in love with Kai already, is grateful his best man duties are light enough that he can focus all his attention on Kai. After all, with Enchanted Occasions Event Planning handling the Olesson-Pakulski wedding, what could possibly go wrong?
Lesetiger's Review:
Best Beast was my first story in the "Enchanted Occasions" world by E.J. Russell and the novella worked well as a standalone.
The author created many fantastical paranormal creatures. I liked Kai and Jovan well, with Kai having the distinction of not always being visible. I invited the two to their best friend's wedding and it was really funny at times what sudden unexpected problems arose there. I really liked the two main characters, the chemistry between them was definitely right.
I liked the story, it was alternating, sometimes funny, sometimes with some drama and sometimes a steamy romance. Unexpected twists and turns make the book entertaining. A sweet story for in between.
Kirt Graves has a big part in this, who is a master at portraying the emotions of the protagonists super well, so that as a listener you find yourself in the middle of the story. It is always a pleasure to listen to Kirt Graves.
🎧Audiobook Review🎧
Overall: ⭐️⭐️⭐️⭐️️
Performance: ⭐️⭐️⭐️⭐️️⭐️ ️️
Story: ⭐️⭐️⭐️️⭐️
Best Beast is currently available as an Audiobook and e-book and can be read as part of your Kindle Unlimited Subscription.
Try Audible Premium Plus and Get Up to Two Free Audiobooks
4 Stars Audio Code provided funny KU Lesetiger Paranormal Series Standalone