The Werewolf's Heart by F.N. Manning 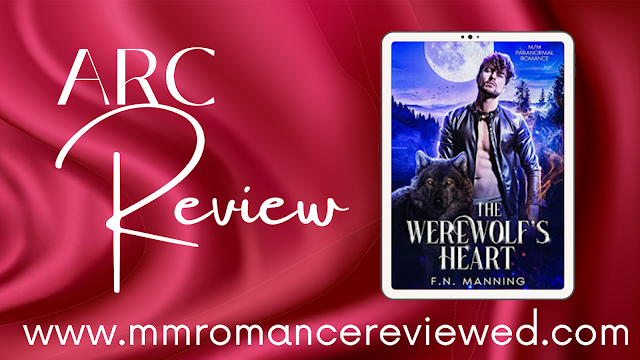 “It’s only scary when you aren’t here.” Oh no he didn’t. He totally went in for the kill. He was evil. I groaned, putting a hand over my heart like he wounded me." The Werewolf's Heart.
From the blurb:
A supernatural detective goes undercover to catch a predator… love was never part of the plan.
Being a new homeowner is nothing like Aaron Honeywell imagined. Instead of unpacking and 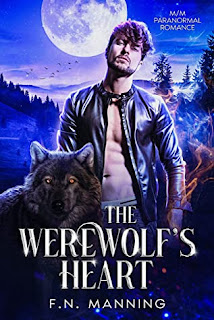 decorating, he’s suddenly dodging grabby fox shifters and getting a crash course in the supernatural world. And his teacher is none other than a drop-dead sexy werewolf who seems to want him too. But he’s sworn to put Aaron’s safety above everything else, including their desires.
Merritt Slate loves his job. Usually. It’s just hard to remember why when the detective is stuck undercover in suburbia to catch a predator powerful enough to abduct werewolves. He won’t let an innocent person get caught in the crossfire, so protecting Aaron is more important than his feelings, no matter what his wolf thinks.
But the threats lurking outside their cozy street are getting closer to home. Kidnapping shifters is just the beginning of a sinister magical plot that may require Aaron’s help to succeed… whether he’s willing to provide it or not. Can the werewolf protect his heart or will evil forces shatter it forever?
The Werewolf's Heart is an explicit gay paranormal romance featuring action, magic, romance, and a happily ever after.
Laora's Review:
This to me was felt like a mystery and paranormal book with a side of romance between Aaron, love him and his discovery who and what he is, and Merritt.
All the characters are given enough body, but I still like to know more about Kara and Frost. I am going keep a eye out for book two in this new Supernatural Affairs series, because I am left wondering if we get a new mc couple or we keep going with Aaron and Merritt and follow them along to adjusting life and hunting the now partially known 'bad guys' higher up the 'food chain?'
This couple found their hfn/hea.
The author wrote The Werewolf's Heart in such a way that I wanted to read more to see where the plot went, very engaging book in my opinion.
Rating: 4.5 Stars
The Werewolf's Heart is currently available in e-book and paperback and can be read as part of your Kindle Unlimited Subscription
4.5 stars ARC HEA KU Laora magic mystery Paranormal Romance werewolf