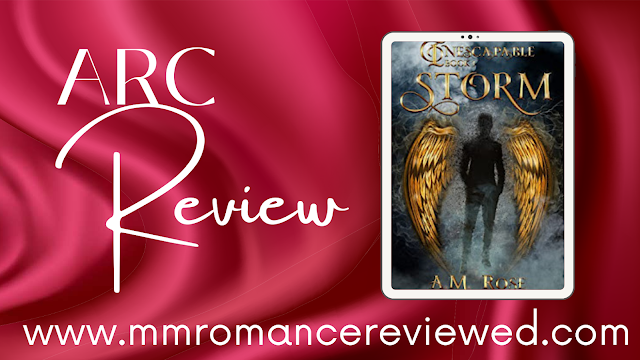 Storm is just a sweet little start of a new series by the duo known as A.M. Rose. Color me intrigued.
From the blurb: 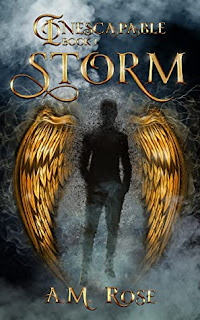 Since the dawn of time, the Kriila have lived among humans. Winged, mysterious, beautiful, and privileged. As their leader, Kiran has seen just how big the divide between the two species is. And he wants nothing more than to bring harmony and equality between them. He didn’t plan for his human mate to be the catalyst that shakes up their world when he chose him. But will that be the change they need? Or will it cost Kiran everything he’s worked for?
Jude has lived his entire life watching adoration being heaped upon the Kriila. As a human, he believes they are to be resented, not revered. They fly high above humans and perch in positions of power while everyone else struggles. The Kriila pay little attention to the struggles of humans and Jude has no expectation that will ever change. But then Kiran chooses him as his mate, and everything Jude believes in shifts. Was every opinion he ever had a prejudice? Or is Kiran just using him to push his own agenda?
Jacqueleen the Reading Queen's Review:
I must admit I spent some time wondering what we could expect next from these authors now that the Daydream, Colorado series was completed. I absolutely adored those books and if you haven't read it you can start with book 1 Blindspot. If you like magic, mystery, and romance you won't be disappointed.
But back to this series. With Storm, we are given an entire new world to explore. There are humans and Kriila who co exist in the world. Kriila are humanoid, yet they have massive wings which allow them to fly and can be retracted at will. It is the Kriila who govern the populations which are divided into different circles (sort of like regions) and each have their own Kriila in charge of that circle. With me so far? There was a lot of worldbuilding as this is the start of a series, but I didn't find it overly complicated at all. There is also a lot of political stuff going on in this world as some Kriila still see humans as less than and believe they are above them in station. Kiran, whom is the Council leader of ALL the circles, does not share that belief and it is a good thing he doesn't or else he wouldn't have been too happy with finding out his mate is a human named Jude.
I loved how sweet Kiran was with Jude. He understood he was human and wouldn't necessarily feel the pull of their mating like a true Kriila. Kiran was patient and kind. He gave Jude all the time he needed to come to terms with everything their mating would entail. Not only is Jude mating with someone of another species, but the leader of that species as well. There are plenty of complications that come along with both, so it was nice how the romance portion flowed along with little angst. It didn't take Jude long at all to see what a wonderful partner Kiran could be.
The bad guys in this were certainly conniving scum and I really hope the next book proves to put a nail in their coffin. From little hints along the way I have a feeling they are guilty of more than just their crimes told in Storm. Speaking of book 2, I am so pleased with whom it appears to be about. I couldn't think of a better mate for Jude's bestie than someone with the best of the best training in protection. I'll be keeping an eye out for the next release for sure!
Rating: 4.5 Stars
Storm is currently available as an e-book and can be read as part of your Kindle Unlimited Subscription
4.5 stars ARC Fated Mates Jacqueleen KU magic mystery Paranormal