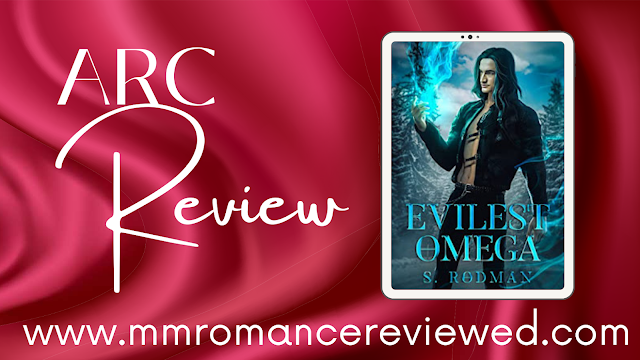 Supervillain extraordinaire is still life goals for necromancer and shifted Silas. But building their pack, hiding from the Council, and dealing with an evil dagger cause Dean and Silas to break apart, can they fix their relationship and save their pack in time? Silas Darkstar returns to reclaim his title as Evilest Omega
From the blurb:
Silas Darkstar is a powerful necromancer, an aspiring supervillain, a wolf shifter and an omega. After years alone as an outcast, he is enjoying life with his mate Dean and the pack they have created. 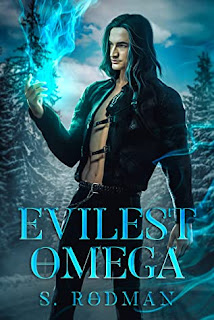 Sure, they are on the run from the Council and as the only magic weaver, a lot falls on his shoulders to keep them safe. But his found family is worth it.
This pesky dagger, brimming with dark magic that he found in an abandoned mine, isn’t anything he can’t handle. He can ignore its siren call.
Dean Darkstar loves his mate and loves his pack.
But Silas’s powers are growing and they are darker than before. Dean is worried. Silas is not acting like himself. He is cold, distant, even more ruthless than ever. Unpredictable.
Dean knows he needs to do something, but the idea breaks his heart.
Meanwhile, the Darkstar pack is growing in the most unusual way. It appears there is going to be the pitter patter of mothman baby feet. The pack is ecstatic.
But can Dean keep them all safe? The Council is closing in and while Silas seems to be dispatching them one by one, what price is the dark magic extracting?
Can Dean protect Silas from himself?
Will he have to choose between Silas and the pack and keep them safe from him?
He knows making such a terrible decision will destroy him.
However, it may just be one he has to make.
Or does he put his faith in Silas and trust that love can conquer all?
Jacquie's Review:
Evilest Omega took me a couple of hours to read because I just couldn't put it down. There's no sophomore slump with this one and it starts by picking up where the first book left off.
Silas is struggling to be a happily mated omega and a badass but Dean loves him completely and doesn't need him to change.
For reasons (no spoilers) Silas and Dean spend quite a bit of the book apart, only coming together for Silas's heats. So there's plenty of steam and also a ton of angst.
This book hurt me and I loved it. Dean took a lot of the blame onto himself but really, his guy is an angel and he was trying his best. Not that I actually blamed Silas either, it was a crappy situation made worse by past trauma.
Fantastic ending and a brief peek at another book for Silas and Dean.
Rating: 5 Stars
SNik's Review:
Second in the series, must be read in order due to the backstory provided in the first book (Evil Omega). Paranormal omegaverse.
An immediate continuation from the first book, picking up with necromancer Omega Silas and Alpha shifter Dean as they try to grow their pack while hiding from the clutches of the horrible Council.
There is a lot going on this time around, and I had some struggles in that there is no background explanation for the dagger and its influence on Silas, the secondary character interactions seem superficial, and Silas and Dean are separated by a lack of communication and then the growing number of outside factors which interfere with their relationship.
However, I am still enamored with Dean and Silas, Dean for his constancy, Silas for his attitude and confidence, all their interactions hurtful and not, their love, rebuilding of trust, and of course the steamy scenes.
I am here for this series as I enjoy the characters, the writing and the world built.
Rating: 4 Stars
Jacqueleen the Reading Queen's Review:
Dean and Silas are back and there's trouble in paradise so to speak. The newly formed pack with Dean as the Alpha has grown since the last book, but not quite enough. On the run from the council their numbers make them harder to hide, but not big enough to be a true force in a fight. Silas' powers only go so far which is why when he finds a magical knife that increases said powers Silas can't let it go. Unfortunately, the knife doesn't want him to let it go either. It whispers dark thoughts into his mind, twisting him against his mate. Dean is at a loss how to help and when he finally comes up with a plan it's most definitely the wrong one.
As with book 1 there is plenty of action and steam. Old enemies finally get whats coming to them. We meet some new characters. I'm especially interested in a certain silver haired mage. Thankfully this book ends with our MCs in a solid place, but it's not over yet. There's a sneak peek at book 3 in the series at the end and it gives the reader just enough of a tease to have us dying for more. I'll be keeping my eyes peeled for when its release is announced for sure.
Rating: 4.5 Stars
Miki J's Review:
What the actual beeeeep??
I was truly stunned – two of the most stubborn and idiotic characters ever!!  And then throw in an evel kneval possessive knife and you’ve got an absolute sheizerstorm of epic proportions!  I’ve got a bruise on my forehead from thumping the table….so I moved to the lounge to enjoy the rest of the book.
The pregnancy was funny and adorable !!  This story is quick pacing & snappy and oh so entertaining – bit of a mystery, a heck of a lot “oh no” moments – do not toss the kindle !!!  This story is more about trust, forgiveness, bad decisions with more bad decisions and then hope and love. They do get there in the end …. but oh, what a ride!
Rating: 4 Stars
Evilest Omega is currently available as an e-book and can be read as part of your Kindle Unlimited Subscription.
4 Stars 4.5 stars 5 Stars angst ARC Jacqueleen Jacquie KU magic MPreg Paranormal Series Shifters SNik steamy