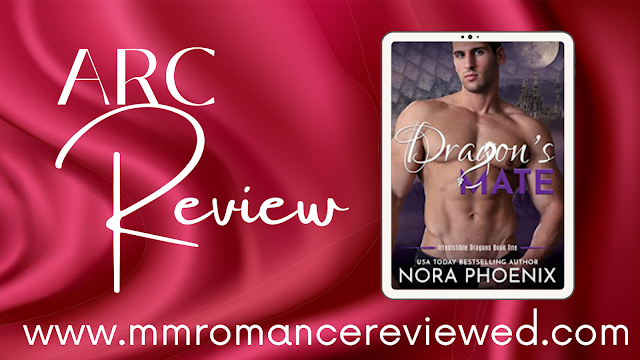 Dragon's Mate is the start of a new series and is a spin off from the Irresistible Omegas series. This series focuses on the second pack and starts with Alpha Rhene Hightower finding his mate in the most unexpected of places.
From the blurb:
One dragon. One wolf. Two alphas. Surely Fate must’ve messed up. 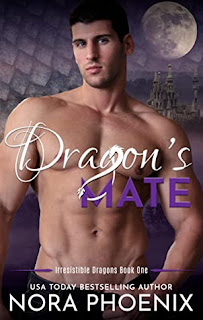 After spending the last two hundred years locked up in the family castle with his three younger brothers, Erwan is climbing the walls. Literally. He’s a dragon who isn’t allowed to fly, forbidden to use his magic, all to stay hidden from the rest of the world. How will he ever find his mate like this?
But when he finds an injured omega in the woods around the castle and brings him home, the spell that kept them hidden is broken. Erwan wants their dragon clan to re-enter the world, but his father is dead set against it.
When wolf pack alpha, Rhene, comes a-knocking to demand the omega back, Erwan is shocked by what Fate whispers in his ear. Then again, the same is true for Rhene. Neither one of them imagined their mate quite like this.
Two alphas? A dragon and a wolf? A man whose patience has been stretched thin already and one hothead? Uh oh. At least it makes for some highly combustible sparks.
Soon, they discover they have bigger problems. Others have felt the dragons’ magic stir again as well…
Dragon's Mate is the first book in the Irresistible Dragons series. This is a spin off from the Irresistible Omegas series, but you don’t need to have read that to enjoy these two as they fight, bicker, and stumble their way into love.
Reds Book Reads Review:
Dragon's Mate is just amazing and has everything you expect from a Nora Phoenix series whilst being something totally new. I loved the introduction of dragons and I really can’t wait to find out more about what happens with this series.
I would definitely say you should read the Irresistible Omegas series first as there are some parts that will just make more sense if you know the backstory. Whilst there is some crossover of characters, this is very much about the newer pack and I am super excited to learn more about them all. If this is anything like the Irresistible Omegas series, I’m expecting this series to be outstanding and this book really does set the bar high!
Rating: 5 Stars
Janet's Review:
Dragon's Mate is the start of a new series in the Irresistible Dragons series featuring Rhene Hightower, an Alpha wolf and Erwan Doyle an Alpha Dragon and crown prince of the Dragons.
When Erwan rescues an Omega his world starts to crumble, and truths come into the light. Rhene finds a castle hidden behind a magical shield when he’s searching for his lost Omega. When he meets Erwan for the first time he’s captivated.
Their story is sweet, hot and steamy. I loved the natural progression of their relationship. There’s a fantastic mystery that they will need help solving.
It was fantastic being able to catch up with the Hayes Pack! I loved Erwan’s brothers! Overall, fantastic!! This hooked me and didn’t let me go, I’m still thinking about it!! It’s extremely well written and the pacing grips you.
Rating: 5 Stars
Dragon's Mate is currently available as an e-book and can be read as part of your Kindle Unlimited Subscription
5 Stars ARC Dragons Fantasy Fated Mates Janet KU Reds Book Reads Series Shifters spin off