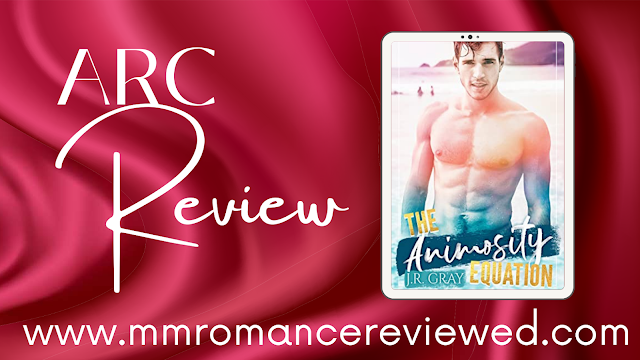 The Animosity Equation is a steamy college romance with so much chemistry that the characters think they hate each other...
From the blurb:
Have you ever loathed a person so intensely the sight of them made you contemplate homicide? 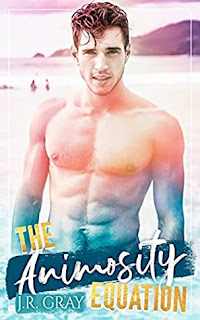 First day of college, everyone is settling into their rooms, and in walks Jeff Woods—the blond bastard. He's arrogant and smart and an elite swimmer and worst of all everyone loves him. Only he's insufferable and flirty, and a sex god. He pushes every button I never knew I had, all with an air of indifference, like he doesn't know the affect it has on me.
Did I mention he's the hottest guy I've ever laid eyes on?
I'm just some closeted red-neck from the south who's more comfortable on a horse and in a pair of boots than trying to figure out this Ivy League stuff.
There's no way a guy like him would ever look at me twice.
Hate is the only equation.
The Animosity Equation is a standalone enemies to lovers, roommates, forced proximity, wild ride of teasing, lust, and so much more.
Tatted_book_freak's Review:
An explosive enemies-to-lovers story! And, they knew just how to fight with their playful and snarky banter! The constant bickering, arguing, f**king, and miscommunications were the build up that continued their animosity with perfection.
“𝕀 𝕕𝕠 𝕝𝕚𝕜𝕖 𝕥𝕠 𝕥𝕙𝕚𝕟𝕜 𝕀 𝕙𝕒𝕧𝕖 𝕒 𝕥𝕒𝕝𝕖𝕟𝕥 𝕗𝕠𝕣 𝕡𝕚𝕤𝕤𝕚𝕟𝕘 𝕪𝕠𝕦 𝕠𝕗𝕗 𝕦𝕟𝕥𝕚𝕝 𝕪𝕠𝕦 𝕗𝕦𝕔𝕜 𝕞𝕖.”
Once Mason and Jeff finally decided to let go of their past and present hang ups, their chemistry was a frenzied storm! Not to mention their connection grew overtime into an unbreakable bond that they both were in dire need of obtaining.
“𝕐𝕠𝕦 𝕙𝕒𝕧𝕖 𝕒 𝕙𝕖𝕒𝕕𝕒𝕔𝕙𝕖 𝕓𝕖𝕔𝕒𝕦𝕤𝕖 𝕪𝕠𝕦’𝕣𝕖 𝕤𝕥𝕦𝕡𝕚𝕕?”
I absolutely loved the snide remarks and total honesty of Mason’s family, specifically Grans. The bittersweet time with her amusing and entertaining, never knowing what was going to come out of her mouth.
“𝕐𝕠𝕦 𝕤𝕙𝕠𝕦𝕝𝕕 𝕓𝕖 𝕤𝕔𝕣𝕖𝕨𝕚𝕟𝕘 𝕚𝕟 𝕥𝕙𝕖 𝕓𝕒𝕣𝕟 𝕝𝕚𝕜𝕖 𝕥𝕙𝕖 𝕣𝕖𝕤𝕥 𝕠𝕗 𝕥𝕙𝕖 𝕦𝕟𝕞𝕒𝕣𝕣𝕚𝕖𝕕 𝕔𝕠𝕦𝕡𝕝𝕖𝕤 ‘𝕣𝕠𝕦𝕟𝕕 𝕙𝕖𝕣𝕖,”
JR single-handedly hit the nail on the head with a southern family’s demeanor as a whole! Not sure why’d I expect anything less!
Rating: 5 Stars
Amy_tbs' Review:
“𝑾𝒆 𝒅𝒊𝒅𝒏’𝒕 𝒌𝒏𝒐𝒘 𝒉𝒐𝒘 𝒕𝒐 𝒅𝒆𝒂𝒍 𝒘𝒊𝒕𝒉 𝒕𝒉𝒆 𝒘𝒐𝒓𝒔𝒕 𝒑𝒂𝒓𝒕𝒔 𝒐𝒇 𝒔𝒐𝒄𝒊𝒆𝒕𝒚. 𝑵𝒐𝒏𝒆 𝒐𝒇 𝒖𝒔 𝒅𝒊𝒅. 𝑬𝒗𝒆𝒏 𝒂𝒇𝒕𝒆𝒓 𝒈𝒐𝒊𝒏𝒈 𝒕𝒉𝒓𝒐𝒖𝒈𝒉 𝒊𝒕, 𝑰 𝒘𝒂𝒔 𝒔𝒕𝒊𝒍𝒍 𝒖𝒏𝒄𝒐𝒎𝒇𝒐𝒓𝒕𝒂𝒃𝒍𝒆 𝒂𝒃𝒐𝒖𝒕 𝒎𝒚 𝒍𝒊𝒇𝒆. 𝑾𝒆 𝒂𝒔 𝒉𝒖𝒎𝒂𝒏𝒔 𝒄𝒐𝒖𝒍𝒅 𝒄𝒓𝒆𝒂𝒕𝒆 𝒕𝒉𝒆𝒔𝒆 𝒕𝒉𝒊𝒏𝒈𝒔 𝒃𝒖𝒕 𝒘𝒂𝒏𝒕𝒆𝒅 𝒕𝒉𝒆𝒎 𝒔𝒘𝒆𝒑𝒕 𝒖𝒏𝒅𝒆𝒓 𝒕𝒉𝒆 𝒓𝒖𝒈 𝒂𝒏𝒅 𝒊𝒈𝒏𝒐𝒓𝒆 𝒘𝒉𝒚 𝒔𝒐𝒄𝒊𝒆𝒕𝒚 𝒃𝒍𝒆𝒆𝒅𝒔 𝒇𝒓𝒐𝒎 𝒕𝒉𝒆 𝒔𝒆𝒂𝒎𝒔.”

The Animosity Equation was one of the best books of 2022 for me! I absolutely adored everything about it. J.R. Gray has fast become a One-Click author for me and I literally couldn't contain my excitement for another installment of the Love Equations series!

Animosity Equation bucket load of all my favourite tropes. A steamy Enemies-To-Lovers that was drenched with tension and sexual loathing/longing. The very best type of tension there is! This well crafted forced proximity, Roommates-to-Lovers and sports romance. Jeff and Mason had me glued to each chapter i couldn't get enough of their back and forth games. I just wanted all their pent up animosity it was absolutely thrilling and I wanted to drawn in their hate.

As with many of J.R. Gray's book there was plenty of thought provoking moments and I loved the journey these two went on. This was a lovely story of found families, coming out, loss, self-preservation, first loves and breaking down the walls we build around ourselves.

“𝑻𝒉𝒆𝒚 𝒓𝒆𝒂𝒍𝒍𝒚 𝒇𝒆𝒍𝒕 𝒊𝒕 𝒘𝒂𝒔 𝒘𝒓𝒐𝒏𝒈, 𝒂𝒏𝒅 𝑰 𝒄𝒐𝒖𝒍𝒅𝒏’𝒕 𝒃𝒍𝒂𝒎𝒆 𝒕𝒉𝒆𝒎 𝒇𝒐𝒓 𝒕𝒉𝒆𝒊𝒓 𝒊𝒈𝒏𝒐𝒓𝒂𝒏𝒄𝒆. 𝑴𝒐𝒔𝒕 𝒆𝒗𝒆𝒓𝒚𝒐𝒏𝒆 𝒕𝒉𝒆𝒓𝒆 𝒇𝒆𝒍𝒕 𝒕𝒉𝒆 𝒔𝒂𝒎𝒆. 𝑻𝒐𝒐 𝒄𝒍𝒐𝒖𝒅𝒆𝒅 𝒃𝒚 𝒄𝒖𝒍𝒕𝒖𝒓𝒆 𝒂𝒏𝒅 𝒓𝒆𝒍𝒊𝒈𝒊𝒐𝒏 𝒕𝒐 𝒔𝒆𝒆 𝒐𝒖𝒕𝒔𝒊𝒅𝒆 𝒐𝒇 𝒕𝒉𝒆𝒊𝒓 𝒇𝒂𝒊𝒕𝒉.”
Rating: 5 Stars
Jacqueleen's Review:
I love me some enemies to lovers and this title says it all.
I read The Friendship Equation back in August 2021 so it took me until partway through this book for me to realize that Jeff was the asshole competitive swimmer in book 1. Turns out there's a lot more to Jeff than meets the eye. He uses words as a weapon and rarely lets his mask slip. He has his reasons for why he is the way he is and honestly I don't blame him. Life hasn't been the kindest to Jeff so far, but all that changes with Mason.
Mason is the quintessential closeted southern rancher. He plans to spend his life that way, until he meets a snarky swimmer named Jeff his freshman year of college. Something about Jeff just gets under Mason's skin. There's plenty of back and forth sniping at one another and the UST was off the charts. I couldn't wait until the two finally gave in because I knew they'd be explosive. I was right.
This book has lots of steam and I would say medium to lower angst. I loved Mason's cousin and I really hope he gets his own book. He was certainly a character. The ending was absolutely adorable. The next book is The Forbidden Equation and features Harden's brother whom we met in book 1. I can't wait to see what he gets up to based on the blurb. He's going to shake things up for sure.
Rating: 3.5 Stars
Heather's Review:
This book started off with a bang, drew me in and held my attention from the first page to the last!  Not having read the first book in the series, I had no idea what I was in for, but it was a roller coaster ride featuring instant attraction, miscommunication, enemy vibes and so much chemistry!
This book portrayed the classic college characters - one out and proud, the other queer and closeted and exploring for the first time away from home... the first part was a little like watching a ping pong match - both characters bouncing off each other and learning a little but not ready to admit what they wanted...
I loved watching the characters grow and my only wish is that we'd see more of their second summer together...
Rating: 4.5 Stars
3.5 stars 4.5 stars 5 Stars Amy_TBS ARC Contemporary Enemies to Lovers Forced Proximity Heather Jacqueleen Series Standalone steamy tatted_book_freak