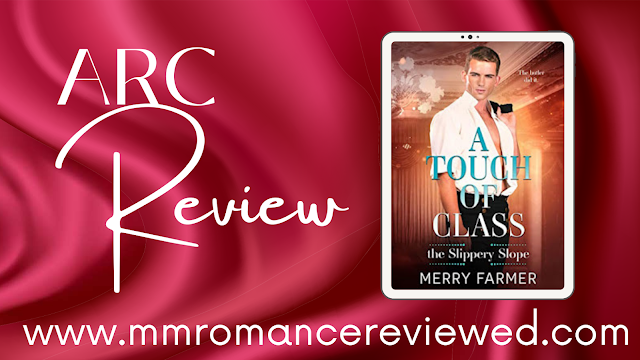 “ Be strong. Just remember that strength comes from accepting yourself just as you are and knowing how to use those beautiful, vibrant emotions within you as the source of power they could be.”
From the A Touch Of Class blurb:
The butler did it… 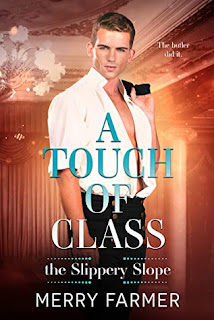 Uptown industrial heir Kelsey Jamison III has been born into wealth and privilege, and it has made him completely miserable. Driven by guilt, neglect, and self-loathing, Kelsey lives the most self-destructive life he can as a way to seek revenge on his villainous father. He is caught in a vicious downward spiral, until help comes along in the most unlikely of men.
…but he had an accomplice…
There is nothing at all wrong with Robert Merriweather’s life…except for the fact that it is hollow and loveless. At least until he takes up the offer for a night of passion with the young man he’s had his eye on at The Slippery Slope for months. “Grace” is everything Robert has ever wanted in a lover—passionate, submissive, and beautiful. Robert is happy to carry on with his new friend without either of them knowing a thing about who the other really is.
…and now they’re both in trouble.
Kelsey’s and Robert’s worlds come crashing together when they come face to face in their ordinary lives. Even worse, when Kelsey’s father demands that he marry his rival’s daughter, Robert is the one who has to plan the wedding. Can the two lovers wrestle themselves free from the bonds of class and duty, or will lives be ruined in the name of a business deal?
You will be on the edge of your seat with this heartfelt tale of class divide, the perfect match gone wrong, breaking into a factory, protesting nuns, and a wedding that will have you gasping and holding your breath to see how it all turns out!
PLEASE BE ADVISED: Steam level – very spicy! And yes, this is an m/m romance involving friends to lovers, a slight age gap, second chances, and fabulous drag queens, so if that’s not your thing, feel free to pass on this one.
THE SLIPPERY SLOPE series consists of:
A TOUCH OF ROMANCE
A TOUCH OF CLASS
A TOUCH OF DEVOTION
A TOUCH OF TENDERNESS
Ms Aimers Review:
Kelsey and Robert’s story touched my soul. Merry Farmer has written a story addressing some difficult issues including thoughts of self-harm and suicide, along with instances familial emotional and physical abuse. I love Merry’s writing because of how she seamlessly weaves history into her storytelling, but in this book I also really appreciate how she wrote both main characters, especially Kelsey, with such insight and sensitivity.
All of that being said, there is humor, laughter, and love in this book. Kelsey and Robert are precisely what the other needs, regardless of age or class differences. I feel like the patrons of The Slippery Slope are my friends. I truly hope I get to read each and every one of their stories because that would mean they got their happily ever after, and they all deserve that.
Rating: 5 Stars
A Touch Of Class is currently available in e-book and paperback and can be read as part of your Kindle Unlimited Subscription
5 Stars ARC Friends to Lovers historical KU Ms Aimers Romance Series spicy Trigger Warning