'He’d missed the endless wellspring of power, desperately, at first, but then he’d gotten used to conserving his magic, only using it when he absolutely needed it.' - Yours Everlasting 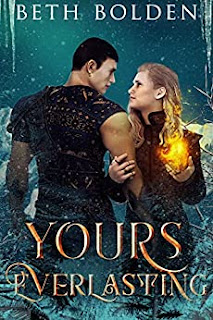 Evander has gone by many names in the last thousand years. He’s lived almost as many lives, using his immortality and his unique shapeshifting abilities to become anyone and anything. His goal was simple: to eradicate the malevolent magic threatening all humankind.

After finally succeeding, Evander feels he’s earned a justifiable and peaceful retirement. But the past never stays buried, and he discovers that it’s been watching him . . .

Marcos, the Guardian of War, has waited, he’s observed, he’s admired, and he’s yearned. But now it’s time for him to step into the light and let Evander see him for who he truly is.

But fate is fickle, destinies aren’t set in stone, and as much as Marcos hopes Evander might be his, it will be the fight of his life to not only win Evander’s heart, but to defeat the evil that once again raises its sinister head.

Yours Everlasting is the second book in the Enchanted Folklore series, I recommend to read, or listen to book one Yours, Forever After first which is the story about Graham and Emory/ Rory. This book tells the story about Evander/ Everard/ Rhys over his long long lifetime and his realization that an opportunity for love and real friendship has been nearby for many years. I appreciated the turns in the storyline where I did not expect them, which just wanted me to read the next page. This is was a full immersive experience for me. I love that we basically see through his lifetime what we see in our contemporary world minus the fantasy, magic etc. at least as far as we know 😉). Power that corrupts, people with good intentions and friendships.

Beth Bolden is giving away copies of Yours, Forever After and Yours Everlasting in our Facebook Group today! Stop by https://www.facebook.com/mmromancereviewed for your chance to win! And watch for our blog tour post with an excerpt next week!
5 Stars ARC Fantasy Friends to Lovers KU Laora magic Series shapeshifter