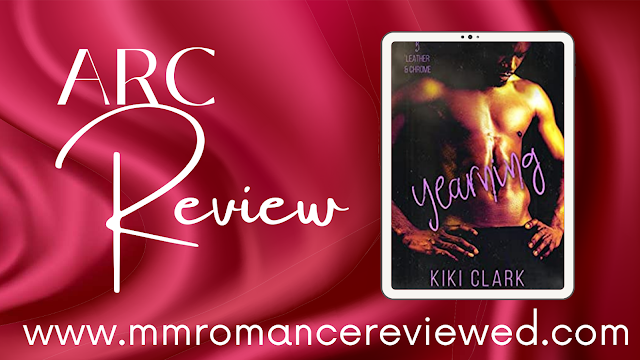 Yearning is the third book in the Leather and Chrome series and it is just as fantastic as the previous two. We briefly met Kenneth in the first book as CJ’s roommate and Houston is a long-standing member of the MC.
From the blurb: 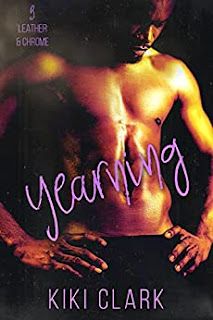 Ride hard. Love harder. Yearn for more.
Houston has a secret. One he hasn’t even shared with his motorcycle club. One that involves rope and dominance and pretty little subs kneeling at his feet.
And he’s fine with that. Prefers it, really. It keeps his life nice and orderly.
But the night Kenneth dropped into his life changed everything. Entranced, he watched the sweet nurse stitch up one of his brothers—and then slip away. Even after he’s gone, his shy eyes full of desperate yearning continue to haunt him.
Houston has an idea of what the boy needs. And he thinks he’s just the Dom to give it to him.
Besides, what good is a carefully compartmentalized life when he could have Kenneth instead?
Yearning is the third book in the Leather & Chrome series but can be enjoyed on its own. The story features a missed connection made right, an age gap, nosy friends with the best of intentions, a possessive biker with a heart of gold, and golden-brown skin wrapped in teal rope.

I loved how well Houston brought Kenneth out of his shell and showed him how worthy of love he was. I also adored seeing him become more confident in himself as the book progressed. Houston is just a protective as the other men in the MC of his boy and I am totally here for it.

It was great to see some of the other MC guys and their boys as well in this book. I can’t wait for the next book where we learn more about Tomas as well. I just love this series so much!

Yearning takes so many complex ideas and makes them simple - shades of gray become black and white - and the acts of domination and submission reflect the ease with which the characters, Kenneth and Houston connect... I've loved both of the previous books in the Leather and Chrome series, but this one just flowed so beautifully...

You don't need to have read the other books in the series to enjoy Yearning, but I do think that I got added depth and enjoyment from knowing more about the side characters and their relationships!