Ten or more things about Mere Rain - An Author Interview 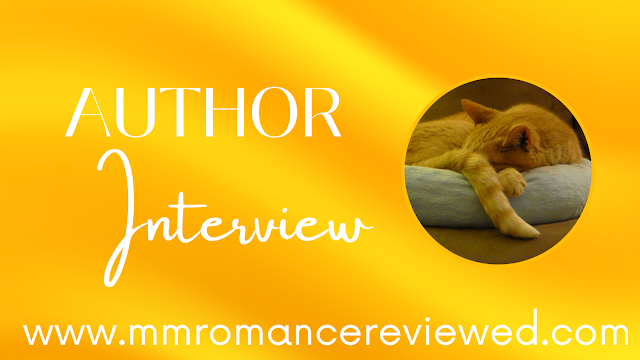 Sometimes you just get chatting with an author and the time gets away... and you forget that there were only supposed to be ten things but that's the beauty of the blog.. you can just keep chatting - even if it takes three months to get the conversation up... oops... but better late than never, I present my author interview with Mere Rain!
Indie or Traditionally published?

Plot or Pants?  Do you pre-plot your books, use an outline, fly by the seat of your pants or some combination of things?

Totally pants! Sometimes I’m taken by surprise by where the story goes. For instance, my new paranormal novella “Darks Arts for Bright Hearts” ended in a completely different place than I had in mind, and some action that I intended to include was cut because it didn’t fit the mood of the story.

It was a short story for a winter holiday Advent Calendar, in 2018 called The Last Birthday Party.  Actually, my first *attempt* to write m/m romance was for the 2017 winter holidays, but it escaped my control and turned into a fantasy novel slash amnesia mystery that was too long for the call. This happens a lot because when I’m interested in characters I want to spend more with them.

and then your most recent one…
I spent 2020 and ‘21 writing a long and cuddly novel called “Tonight and Every Night” where the characters were really decent people who tried to be kind to each other and supportive of their friends. It’s a comfort food and puppies novel. So for a change of pace after that I wrote a short about jerks who fall in love accidentally. “Whiskey and Salt” is basically 11k of sex and banter. I also had a Paranormal Romance novella called Dark Arts for Bright Hearts,  about cursed goth boys sharing a heart, that came out in February.
Do you write full time or part-time?

Part-time, but my day job is freelance editing and research, so I word-work full time.

Oh, this is hard. I’m really into cooking! So I’d have to research what all the people I admire liked to eat, and find menus that were compatible. And also people who would get along! Probably I’d invite some author friends from far apart regions who only get to interact online.

On social media I mostly talk about books, but feel free to @ me about food, too!

Mostly at home at my desk. First thing in the morning (after feeding my cat) I take my coffee to the computer and start writing. That way I get some words in before I get distracted by other work or returning messages etc.

To just keep writing more, I guess. I have a sci-fi short coming out in July, which is done, and I’m scheduled to be on JMS Books’ Advent Calendar (for people who don’t know, it’s a different free book each day) so I’m currently working on a book for that. And I have several other partially finished stories. I often switch between projects depending on mood or what sort of scene I feel like writing. If I’m not sure where a plot is going I switch to a different manuscript and wait for my subconscious to figure out what needs to happen.

Do you write other genres?

I also write speculative fiction, but often with queer characters and/or romantic subplots. So there’s a lot of overlap. The science fiction story I have coming out in the summer is also a f/f romance.

Everywhere! I’m writing in my head pretty much constantly. If we talk in person and I look like I’m not paying attention, it’s not that I was bored – just the opposite! You said something that made me think of a plot idea and I’m filling it in. Just kick me if I don’t answer you.

I’m completely serious. I don’t know what everyone else is laughing at. It wasn’t me, I didn’t say a thing.

(I think it was the bathroom BJ in “Whiskey and Salt,” where they annoy the wedding guests in the neighboring stalls, but I’m juvenile.)

I think most people are too hard on themselves.
If you need some compliments from a stranger just hit me up on twitter or Facebook.
@mere_rain
facebook.com/mere.rain.54