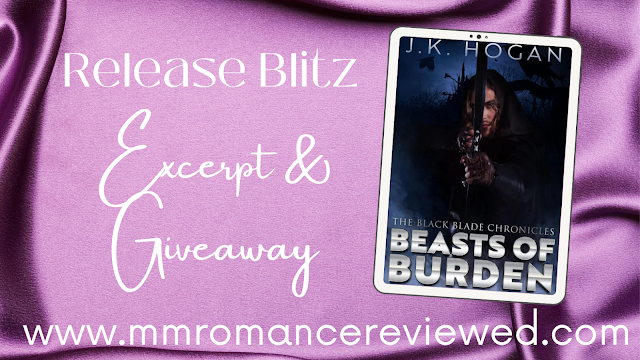 It is not a standalone story. It is the second book in The Black Blade Chronicles series.

This book ends on a HFN, with the understanding that the HEA will be at the end of the 3 book arc.

Senne Clayward and Kasimir vas Hjardar continue their quest to rescue Senne’s young ward, Princess Sigrid, from the evil tyrant who has taken her hostage. After they follow through with a mad plan to sneak into King Prosper’s fortress that only halfway succeeds, the princess slips through their fingers once more. As they travel across the continent of Taleth, they are one step behind their quarry at every turn.

Encountering numerous obstacles and enemies both old and new, Senne and Kasimir doggedly pursue their goal while coming to rely on each other more than ever. The two unlikely companions enlist the help of a small band of adventurers to track the princess and intercept her captors while the armies of Toivonen march westward behind them.

Kasimir continues to grapple with the beast on his back—a lifelong struggle—while Senne must bare his soul to earn the trust of those around him. Can they survive the journey? Will they save Sigrid in time to keep her from harm and prevent the realm from plunging into eternal darkness? And what will be left for them after the dust settles?

“Here we go,” Kasimir murmured under his breath. He turned to confront a group of greycloaks who had approached them from behind. None of them seemed to have any visible rank higher than foot soldier. Kasimir put on a carefully blank expression. “There a problem?”

“By royal decree, bearing arms within the city walls is prohibited. You are in violation of this order.”

“Oh, aye.” Kasimir nodded dumbly. “Saw the notices, I did. Smart idea, that. Only the notices was addressed as to say ‘Attention Senkalese citizens and Yesenians traveling within the city, by royal decree’ an’ all that. But y’see, we’re not Yesenian, an’ me mate here, well, he cannae read at all. So I figures it ’ad naught to do wi’ us.”

Senne cast him a puzzled look, no doubt wondering why he was putting on the thick Lunarii peasant burr. Kasimir’s reasoning behind it was sound. These guards were merely grunts. He had to confuse them enough to report to their commander, because without someone of higher rank noticing them, they had no chance of being put before the king.

Just as Kasimir predicted, one of the grunts, the one who seemed to be somewhat in charge, scratched his head and looked at the soldier to his right. “Does it say that?”

The other guard shrugged. “Well, yeah, seems right enough. Never thought about what happens if we catch an outlander armed up in the city.”

“We ought to fetch the captain, then,” said the grunt-in-charge.

“I mean you, ya bloody imbecile,” he spat. The foot soldier flinched and scarpered off. “Youse two, don’t move a muscle until the captain gets here.”

“Wouldn’t dream of it,” Kasimir said in his normal accent.

Senne snorted quietly. The soldier gave them an odd look but didn’t comment. After countless minutes of the tension-filled standoff, the messenger returned, leading a man wearing a red officer’s cloak.

Upon further inspection, Kasimir realized he was not only an officer, but a decorated one. His cloak was pushed back off his shoulders so Kas could see he wore epaulettes studded with silver stripes and dripping with braided silver cords. The dragon emblazoned on his armor appeared to be inlaid with real silver, and the regulation bycocket hat had been replaced by an obsidian dragon-winged battle-helm. It all made for a fearsome sight, and Kasimir had to fight the urge to take a step back when the man approached.

When the captain reached them, he flipped up the visor of his helm, and Kasimir was surprised that he appeared much younger than he would’ve thought for a high-ranking officer, though the gray threaded through his dark hair proclaimed him to be middle-aged. He was handsome in that craggy, chiseled way Yesenians had—they always seemed to look as though they’d gone straight from mother’s womb to the battlefield and never looked back—with his square jaw, closely trimmed black beard, and slightly bent nose, as if it had been broken a time or two.

“I am Vilhelme, Commander of the King’s Army. Who are you and why are you in my city?”

“Commander,” interrupted the head guard. “These blokes said the arms notices only refer to Yesenian citizens, so I didn’t know what to do with ’em.”

The look Vilhelme turned on the man was nothing short of murderous. “That is absurd.” He turned back to Kasimir and Senne, effectively dismissing the ignoramus, and repeated his question. “Who are you and what are you doing here?”

Vilhelme glared over his shoulder again. “In that case, welcome. If you wish to trade in the city, I am afraid you must surrender your weapons. They will be stored in the armory until you are ready to move on.”

Kasimir’s jaw tensed, his pulse thudding in his throat. “Can’t do that, friend.”

Vilhelme attempted a smile, though it was more a baring of teeth than anything. “You may address me as Commander Vilhelme and nothing else. If you do not wish to disarm, you will be escorted to the main gate so you may leave. In fact…” Vilhelme narrowed his eyes. “You should not have even gained entry with all those weapons. I shall have a chatwith the watch captain.”

“No need,” Kasimir said conversationally. “We snuck in.”

Despite the smile, Vilhelme’s eyes glittered with danger. “Why would you do a thing like that?”

“We want to see the king,” Senne said. “Thought if we breached the wall, he’d come down from on high and deliver the mighty blow of justice.”

Vilhelme scoffed. “His Royal Eminence does not entertain petty criminals.”

Vilhelme turned to face him head-on and crossed his arms as if he were bored. “I’m dying to hear what that might be.”

“Tell him,” Kas growled through clenched teeth, “that we’ve come for the girl.”

Vilhelme raised a fist to chin level, almost casually, and they were instantly at the sword points and arrow tips of the guardsmen who had tripled in number and somehow surrounded them. Easily thirty weapons, at least half of which would be aimed at a kill spot somewhere on Kasimir’s body. His vision wavered. His blood ran hot, pounding wildly in his chest and up through his neck, nearly choking off his breath.

“That,” said Vilhelme, “would be inadvisable if the two of you are in any way attached to your hides.” He cast a bored glance at the men around him, oblivious to Kasimir’s torment and the danger they were all in. Kas didn’t think Senne had noticed either.

“All the same,” Senne said, his jaw bunching with his frown. “Tell him the knight and the sellsword have come to collect our charge.”

“Well, I can’t say whether or not you’ll ever see the king, but you’ll certainly get a good long look at the inside of our dungeons,” Vilhelme remarked blandly. Then he gave his head guardsman a small nod. “Take them.”

J.K. Hogan has been telling stories for as long as she can remember, beginning with writing cast lists and storylines for her toys growing up. When she finally decided to put pen to paper, she found her true passion. She is greatly inspired by all kinds of music and often creates a “soundtrack” for her stories as she writes them.

J.K. resides in North Carolina with her husband, two sons, and their pets. If she isn’t writing, J.K. can be found designing book covers at Wicked Pixel Designs, creating fiber art and supplies at Earthbound Fiber Arts watching Hurricanes Hockey and, of course, reading!

your choice of ebook from the author’s backlist (3 winners)

Check out our review by clicking on this graphic: 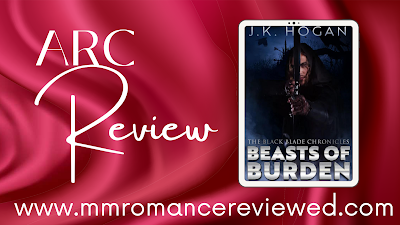