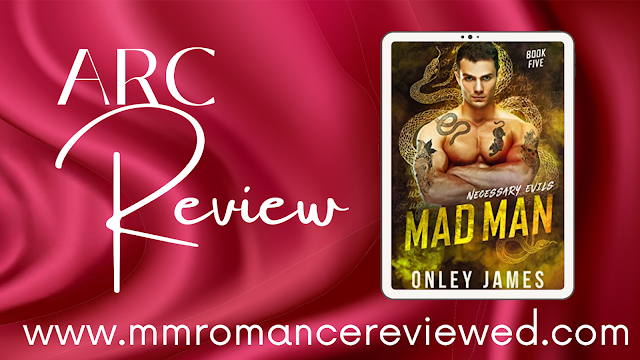 "You and I...we're inevitable. Whether you like it or not"
From the Mad Man blurb: 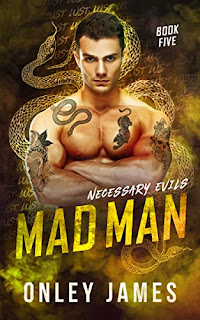 Avi Mulvaney is many things. Son. Twin. Owner of the fashion label, Gemini. Murderous psychopath. Together, he and his brother, Asa, make one brutally efficient monster, ridding the world of predators who victimize the innocent. History proves Avi and Asa don’t do well apart, but their father has decided to test that theory.
Felix Navarro knows exactly who he is. Baby brother. Fashionista. Vigilante. While he’s not happy that his big brother married a Mulvaney, the union has its perks. Like a paid internship with Gemini. But all good things come with a cost and, for Felix, that’s enduring Avi Mulvaney each day, which inevitably leads to thinking about him every night.
Felix doesn’t like Avi. He’s cocky, condescending, overbearing, and inappropriate. He’s also sexy, brilliant, and twice as lethal as Felix. Still, Felix loathes him. Even if he keeps letting him kiss him. And touch him. Even if he slipped just once. It was still hate sex, and it would never happen again. Ever.
Except, Avi’s being sent to help take down a dangerous crime ring and he’s ordered Felix to come along. Felix has vowed to stay strong. To remember he hates Avi. But they’re trapped together and there’s only one bed, and it’s so hard to hate Avi in the dark when he’s whispering how Felix belongs to him. Felix belongs to no man, but Avi is determined. He has one week to prove to Felix that he’s the exception to his rule. After all, who says no to a Mulvaney?
Mad Man is a scorchingly hot, intense, enemies to lovers, psychopath romance with an HEA and no cliffhangers. It features a dirty talking, brutally vicious killer and a sharp tongued murderous fashionista who are both too stubborn for their own good. As always, there’s gratuitous violence, very dark humor, enough blood to film the final scene in the movie Carrie, and enough heat to melt your panties. This is book five in the Necessary Evils series. Each book follows a different couple.
Jacqueleen The Reading Queen's Review:
I really enjoyed finally getting Felix and Avi's story. Felix was such an enigma. He was so strong on the outside, but inside he was so vulnerable and emotional. Noah had it right when he described him as "fragile like a hand grenade." Avi was surprising in how freaking sweet he was. I mean the man is a champion snuggler. I felt out of all the brothers so far Avi seemed to be the one who sort of ""felt"" the most. It also helped that their kinks lined up perfectly.
Speaking of kinks, one of the most interesting aspects of this book was discovering all the ways the twins truly mirrored each other. Asa is a sadist, while Avi is a masochist. While Asa enjoys dominating and dishing out pain to his lover Zane, Avi is the total opposite. He wants to serve his lover and enjoys being on the receiving end of the pain scale. Felix has no qualms being the one dishing it out.
Another aspect of the book I totally loved was the glimpse into how tightknit the 4 of them became. Asa and Avi knew from the start they would never leave one another. It was more than a promise, it was a necessity for them to function in life. Felix and Zane not only respected that, they formed their own bond as well. With both men being in love with psychopaths, Felix and Zane provided each other with a different kind of intimacy. Their friendship and bond was emotional, not sexual. I don't think it could have worked out more perfect.
"There were no secrets among the four of them, but a million kept between them."
I also feel the need to mention how badass Thomas is. I mean, I knew he couldn't be soft after everything we've learned about him so far but man hes got balls of steel. Even in the little sneak peek at the end of Archer's book, which kudos to Onley by the way for giving us that insane little tease to get me dying for more, Thomas was not a man to be trifled with. Of all the Mulvaneys I have a feeling Thomas is the most dangerous of them all.
" Thomas Mulvaney literally just told every single person in this room to fuck around and find out."
Rating: 4 Stars
Mad Man is currently available in e-book and paperback and can be read as part of your Kindle Unlimited Subscription
4 Stars Dark Enemies to Lovers humour Jacqueleen Psychological steamy Trigger Warning violence