Jaded (From the edge book #3) by Eve Riley 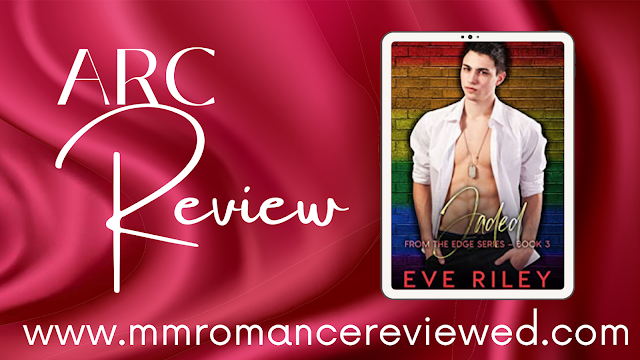 “You’ve been ghosting me for almost two months now. I deserve to know why you have decided that we aren’t friends anymore. - Tyler, Jaded. 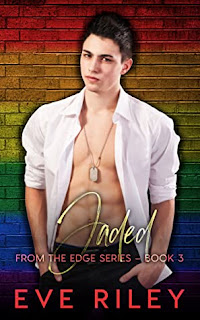 Friends to lovers…Detective Roland Wright lives a lonely and solitary life, filling his waking hours with work and volunteering. It’s been ten years since he lost the love of his life to a drunk driver, but he's still plagued by nightmares.

When a young man shows up at the soup kitchen where he volunteers, Roland tries to convince himself the attraction he feels is purely platonic. At least the handsome stranger is older than he looks, but can Roland risk getting close when his new friend isn’t even gay?

Tyler Foster has lived on the streets since he aged out of the system. When a helpful police officer from the soup kitchen gets him a job, and a real place to live, Tyler feels like life is finally giving him the break he’s prayed for.

Still a virgin, Tyler is confused when he feels an attraction to the larger man. Roland is unlike anyone he’s ever met and he makes Tyler feel things he doesn’t understand.

When he confides in Roland about his past, the truth hits closer to home than either man could have imagined. With Roland beside him, Tyler is willing to do anything to help build the case. Together, they are determined not to let any more children suffer the same fate.

Will Roland and Tyler escape the past and find a future together?

Author Eve Riley is crafting good series with the on ' From the Edge series'.
This third book is all about Tyler, smaller youthful looking 22 year old who just wants to get a break after a life in foster care and living on the street and Roland, mid 30s, large man, former military and police man age gap, and how they slowly become friends and later on boyfriends/ partners. Both have to work through their own different, trauma's to be able to open up and be strong enough to help others and be successful in their relationship. They find their hfn/hea.
Jaded was riveting and all consuming, for the continuing storyline. I just wanted to grab Jerk Jasper, but I guess I have to wait to find out what happens to him. Mason, Jarod and Isaiah have their work cut out to track him and other facilitators.

Rating: 5 Stars
Jaded is currently available in e-book and paperback and can be read as part of your Kindle Unlimited Subscription