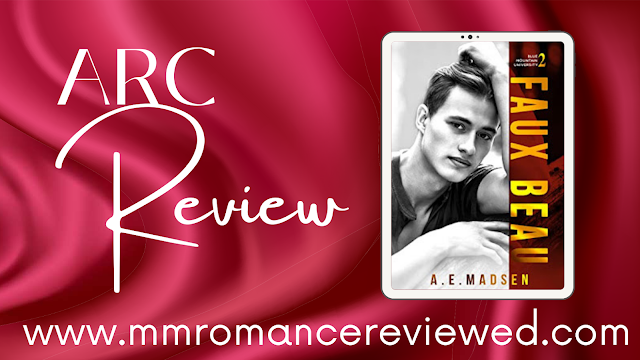 I loved the idea of Liam and Aiden together after reading Duplicity. Their banter was so funny and it seemed to me all that flirting on Aiden's part was not so misplaced...and boy was I right!


From the Faux Beau blurb: 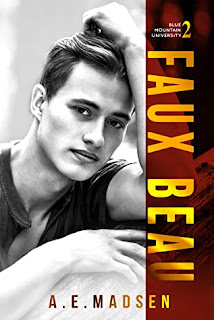 Liam
As the third of my name, I’ve always had a number of expectations placed on me from my father. I’ve never felt like I can just be myself. But after one drunken night with Aiden, I’m not sure I care what anyone thinks anymore. When a work opportunity arises, it might be a good way to subtly test the waters, except Aiden helping me leads my father to the wrong conclusion.


Aiden
Over the years, flirting with Liam has become second nature; he was my first real crush. I didn’t think it’d lead to waking up in his bed after we drank too much. It changes things, but not as much as when Liam tells me his father thinks we’re a couple. I know Liam didn’t expect me to go along with it, but pretending to be his boyfriend shouldn’t be too hard. Right?

I enjoyed learning more about Aiden, Ian, and Liam's past. I knew Ian and Liam had been friends for awhile, but I didn't know it had been quite that long or that Aiden was included in that childhood friendship. The information about the past was important for readers to understand the dynamics of the twins and Liam relationships today.
Something I really liked about the book was the fact that Liam's coming out was a non issue. Yes he had worries about what his Dad would think or his bestie Ian, but it was handled so well. There was no big angsty fight or OMG huge event. Yes there was surprise in some cases, but again it wasn't dwelled on. It was just accepted. I wish everyone could have the same easy experience and appreciated the way the author portrayed it all.
The book wasn't overly steamy for a college romance, but the scenes we did get worked well with the story. With both having roommates, Aiden and Liam were fond of the shower hookup and I did not mind one bit. ;-) Speaking of steam, Aiden's anxiety played a major roll in his sexual experiences, but I really didn't like the way he seemed to string Liam along sometimes. It took him almost the entire book to really open up to Liam and be honest. What made it worse is Liam was nothing but a sweetheart to Aiden. I felt so bad for him when Aiden would play hot and cold. As a sufferer of anxiety issues myself I can understand, but I try really hard to make sure my personal issues aren't the cause of actually hurting someone else.
Just like book 1, I really wish we got an epilogue further into the future. I would have loved seeing Aiden and Liam still together, maybe being able to see the progress Aiden has made to manage his anxiety better and in healthier ways. How that has affected his and Liam's intimacy. But honestly, this is just me being selfish and wanting more of these two MCs together. A lot of the book was spent in the "fake dating" portion of their relationship, hence the book being aptly named Faux Beau. I guess I just wanted more page time with them officially a couple. Good news! There is going to be a 3rd book in this series and it's going to be about Hunter and his mystery man. And with that info you now you know as much as I do about it. Lets hope Madsen drops more hints in the future.

Rating: 4 Stars
Reds Book Reads Review:
I loved the way the two of them slowly fell into a relationship and how Luke made Aiden realise he might have an anxiety issue. I did find Aiden slightly annoying with his issues, especially since they were only hinted at throughout the Book and it took a while to understand what they even were.
On the whole this was an enjoyable read however and I will definitely continue reading this series
Rating: 4 Stars
Faux Beau is currently available in e-book and paperback and can be read as part of your Kindle Unlimited Subscription