Cover Reveal: Courting The Merman by Aramis Jordan with a NSFW Excerpt! 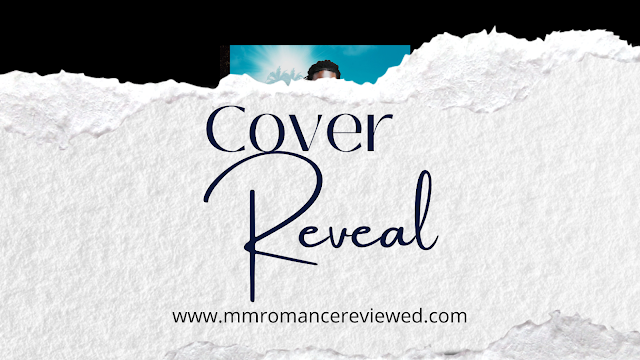 So pleased to be part of Aramis Jordan's team for the cover reveal of Courting the Merman!  Isn't he mesmerizing?  Scroll down for a naughty NSFW excerpt and pre-order information! 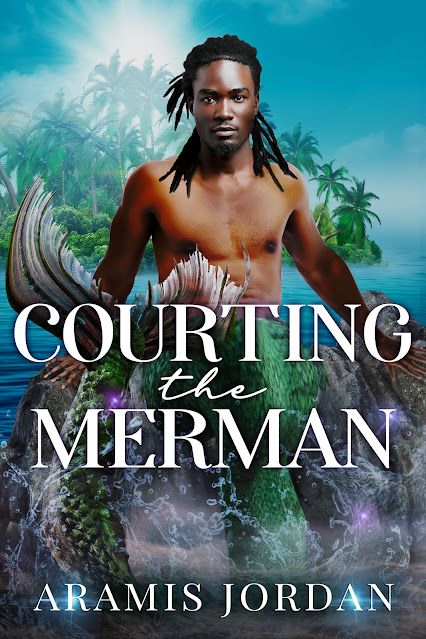 BLURB:
A sinfully rich merchant.
Luis is Puerto Rico’s richest merchant and a known seducer—of women. Yet when his ship is drawn in by a gorgeous merman, Luis is confronted with an attraction he cannot fight.
A merman with a dark past.
Merman Zade should be careful with the older, wealthy man he’s lured in—he knows all too well how fragile human health is. When caution is thrown overboard in the heat of the moment, the consequences are devastating. How can Zade love when his love is deadly?
EXCERPT
“Insatiable,” Zade said, eyeing his twitching cock.
“So are you.”
“Yes.” Zade cupped his balls, which, to Luis’s shock, felt full. “I’m going to milk you for every drop.”
A shiver raced down Luis’s spine. “Such promises.”
“Oh, trust me, I will drain you. You won’t be able to walk when I’m done with you.”
Luis had no doubt Zade would deliver on his promises. Over the past twenty years, Luis had slept with hundreds of women. None had him coming back for more. But if Zade asked him if he wanted to come by his hand and lips every day for the rest of his life, Luis would answer in the affirmative. The thought startled him, and the remaining rational part of his mind—though there wasn’t much left—was glad his time with Zade was limited by nature. Luis wouldn’t admit the notion hurt more than a dagger to the heart.
“I’m going to ruin you for anyone else,” Zade said.
“You already have.”
Pride and satisfaction flashed over Zade’s features, and Luis’s traitorous balls tingled where they rested in his hand. Zade stroked his thumb over them, letting out a pleased hum. “I love how your body wants to give me more.”
“Me too.”
Zade rolled his sack, letting it glide over his palm and fingers. It pulled a contented sigh from Luis.
“You like that?” asked Zade.
“Very much.”
Zade massaged him with his fingertips, letting him feel each little bump. “And I like how the ring keeps them plump and tight. I love how full you are. You look like you’re about to burst.”
Luis was. His gaze raked over Zade, cataloging every muscle as it shifted under his umber skin. He hadn’t expected to be attracted to a male body, but he admired Zade’s bulging biceps, the firmness of his pecs and the dark relief of his abdomen. Had Michelangelo carved a statue from ebony, he could’ve achieved no greater perfection than Zade. Looking at him made his cock throb and his hole strain around the toy.
Zade gently pulled at his balls, drawing a gasp from Luis. The vulnerability was intense, and he couldn’t believe he was letting Zade touch him like that. He was gentle, but could Luis trust him with his most tender body parts?
Zade dipped between his legs and washed his tongue over his sack.
“Oh god.”
Zade repeated the motion, laving his balls with his tongue, getting them nice and slippery. He kissed them, and then his lips stretched, and he took one into his mouth. Wet. Soft. Hot. Luis moaned, slipping into heaven. Zade’s tongue traveled over him, stroking him with utmost care. It was then Luis knew Zade would never hurt him. He was careful, the touch of his tongue delicate without being ticklish. It was perfect. Zade moved to the other half of his sack, letting it glide into his divine mouth. He licked across him, then suckled without pressure, making him feel good.
The plug fucked him throughout it, probing his love knot in time with Zade’s feathery caresses. Luis groaned when the toy hit his core and Zade gave another suckle. He dragged his tongue over him, drawing figures and idle patterns.
Luis’s head fell back in the sand, and he closed his eyes, enjoying the attention on his balls. Zade’s fingers curled around his cock and fisted it, moving up and down. The triple stimulation to his dick, nuts and hole nearly made Luis faint in bliss. Precum seeped out of his slit, and Zade drew his thumb through it, smearing it over his tip.
Courting the Merman releases on May 21st, which gives you plenty of time to catch up on the first three books in the series if you haven't read them yet!   The whole series is currently available as e-books and can be read as part of your Kindle Unlimited Subscription
Cover Reveal Excerpt