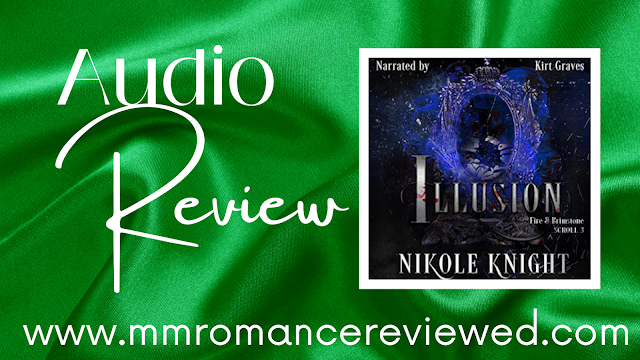 Lesetiger says that Illusion has "a great story and a brilliant narration." 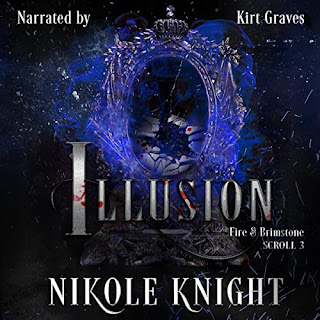 Riley’s Guardians are breaking apart, and he fears he can’t put them back together again.

A hybrid born of an Angel-Fallen union, Riley Shepard is an anomaly coveted by both sides of an ancient war. But he doesn’t want to fight their war; he has his own battles to face. As his family fractures, bonds are tested, and forbidden feelings threaten to tear his heart into bloody thirds.

When the next attack comes - not from the outside but from within - is he strong enough to separate truth from lies, allies from enemies, reality from fantasy? How can Riley know what’s true, when he doesn’t even know what’s real?

Illusion is the third book in the slow-burn harem/poly romance series, Fire & Brimstone, featuring hurt/comfort and broken but brave guardian angels; the first spicy taste of love, and an unlikely hero who learns to embrace his deepest desires.

I read the first two volumes and then found that the audio book of the third volume had just come out. Since the story builds on each other, it makes sense to read or listen to the previous volumes of the series "Fire & Brimstone Scrolls".

For all audio fans, I highly recommend the audiobook! Kirt Graves hit it out of the park with this narration, I was blown away!
The story continues, but differently than I expected. It's not so much about the battle between the angels and the demons.

"Illusion" is a journey of Riley and his guardians. Although there is not as much action and adventure, there are some battles to be fought. This volume is dark, there is some emotional turmoil, and it's not just one of the protagonists struggling with his own demons. Riley's burgeoning feelings for his guardians cause him to take actions that only create more pain. What sympathy I felt for him. Noel also struggles back to life after the horrific events and tries not to let the darkness take over. Gideon and Jai struggle with guilt and shame. But where there is a lot of shadow, there is also a light and despite all the gloom, hope always hovers along. Hope that things will get better. And it does, because Riley and his guardians grow together to a family, which is indeed not filed from bad time. But you can count on your family when you need them most.
In this volume "Illusion" the character development of the four protagonists is in the foreground. The author totally won me over with that, because she did it really well. Riley's adoptive mother makes a brief appearance and she has no good intentions.